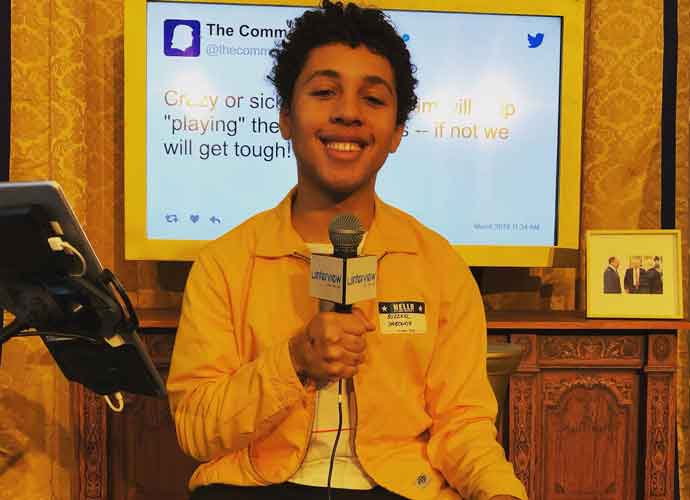 Jaboukie Young-White may not have been well-known up until recently, but he has now made a name for himself as a correspondent on The Daily Show with Trevor Noah.

The 24-year-old comedian spoke to uPolitics.com exclusively about his take on President Donald Trump and First Lady Melania Trump. Noah and the other members of The Daily Show recently gained attention for participating in the promotion of “The Donald J. Trump Presidential Twitter Library” at SXSW, which is exactly what it sounds like: an archive of the president’s thousands of top tweets. Young-White sat on the golden “Trump Toilet” at the Comedy Central activation as he fielded our questions.

“My favorite Trump tweets are definitely the Robert Pattinson and Kristen Stewart relationship drama tweets. I love that he was Team Edward,” Young-White confessed, referencing the Twilight film saga that saw Pattinson and Stewart momentarily become a couple. “I like to think that he at least read the SparkNotes for Twilight.”

Trump tweeted about the pair of actors multiple times in late 2012 after it was reported Stewart cheated on Pattinson with the director of a film she was working on at the time.

Robert Pattinson should not take back Kristen Stewart. She cheated on him like a dog & will do it again–just watch. He can do much better!

Young-White also revealed what he believes would be the biggest success of Trump’s second term in office, if he were to be re-elected.

“Staying alive,” he quipped. “Honestly, at that point he’s going to be pretty old and it seems like he’s not going to get out so just being there will be an accomplishment for him.”

Young-White also said he is convinced there will be a lot of drama surrounding the 2020 presidential election because Trump will refuse to leave office if he loses. The young comedian joked a “SWAT team” will likely be necessary in order to remove the president and that agents would probably find “Wendy’s wrappers” strewn all over the floor of the Oval Office.

“It should be like a publicly televised event,” said Young-White.

So what should happen to Melania if her husband fails to win re-election? Young-White said he believes the first lady will be just fine.

“I think she’ll be very happy,” he said. “She just got dragged into this, she didn’t expect all this.”

Young-White added Melania’s “body doubles” will also likely be “relieved” to see Trump leave office, poking fun at recent rumors that claim the first lady has had an impersonator at some public events.

The comedian also said he strongly believes Sen. Elizabeth Warren (D-Massachusetts) is the main Democrat Trump hopes to run against in 2020. The progressive senator was not only one of the first 2020 candidates to announce she would challenge Trump for a presidential bid, but also the first 2020 contender to call for Trump’s impeachment.

“I feel like Elizabeth is someone who is sincere and [who] is not going to engage with [Trump] on that sot of troll-y level, and he’ll just eat that up,” Young-White said.

Young-White joined The Daily Show in October 2018, his first appearance on the show centering on a funny commentary about why young people in the United States seem to vote less and less. He has served as a writer on the Netflix animated comedy series Big Mouth and has also made stand-up appearances on The Tonight Show with Jimmy Fallon.

A: My favorite Trump tweets are definitely the Robert Pattinson and Kristen Stewart relationship drama tweets. I love that he was ‘Team Edward,’ and I’d like to think he at least read the SparkNotes for Twilight.

Q: What will be the biggest success of Trump’s 2nd term?

A: Staying alive honestly. At that point he’s gonna be pretty old and it seems like he’s not in good health so you know just being there will be an accomplishment for him.

A: They’re gonna have to send in like a straight up SWAT team, it’s gonna be like some TLC quarters-type shit, we just like go into the presidential Oval Office, and there’s just like Wendy’s wrappers on everything and they have to drag him out. It should be a public televised event.

Q: What will Melania do if Trump loses?

A: Elizabeth Warren for sure, like he would love that. I feel like Elizabeth is someone who is sincere and is not going to engage with him on that sort of trolly level, he’ll just eat that up, like I think that’s who he’ll most want to run against.