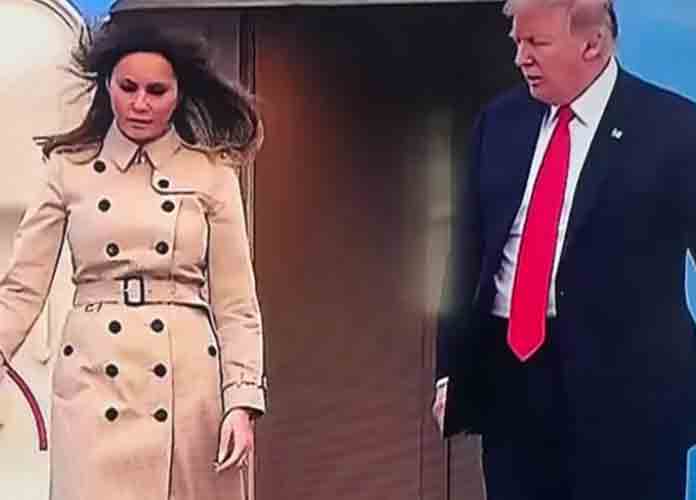 Trump lashes out at media for 'fake Melania' theory

On Wednesday, President Donald Trump called media outlets “deranged” and accused them of digitally altering photos of First Lady Melania Trump and pushing a conspiracy theory that his wife used a body double for a trip to Alabama last week.

The “Fake Melania” conspiracy claims the 48-year-old Slovenian-born first lady has used a stand-in multiple times to appear alongside the president at public events. The theory reappeared on Twitter this week after the couple traveled to tornado-ravaged Alabama.

“The Fake News photoshopped pictures of Melania, then propelled conspiracy theories that it’s actually not her by my side in Alabama and other places,” Trump tweeted Wednesday. “They are only getting more deranged with time!”

The Fake News photoshopped pictures of Melania, then propelled conspiracy theories that it’s actually not her by my side in Alabama and other places. They are only getting more deranged with time!

Several late-night shows have made jokes about the theory, and the panel on ABC’s The View also discussed it.

The tornadoes in Alabama earlier this month claimed nearly two dozen lives. Twitter users quickly began pointing to Melania’s height and facial structure, among other things, in a photo of her and the president visiting survivors as a basis for the “fake Melania” theory.

That is not Melania 🤦 the real Melania’s plastic surgeries left her skin so tight. you could bounce quarters on her face. #Melania #melaniadouble#IsItMelaniaOrMemorex #FakeMelania #fake #melaniabodydouble #ShortMelania https://t.co/3J9qzg000d

Stephanie Grisham, a spokeswoman for the first lady, blasted the women on the The View for laughing at the Melania theory “in the face of tragedy,” calling their response “shameful” in a tweet.

.@flotus & @potus traveled to Alabama to pay their respects & comfort victims of the tornado devastation. In typical fashion, @theview chooses to laugh in the face of tragedy. Shameful. https://t.co/KzG2c4Th4a

One of the anchors on The View is Abby Huntsman, the daughter of former Uah Gov. Jon Huntsman (R), who is Trump’s Ambassador to Russia.