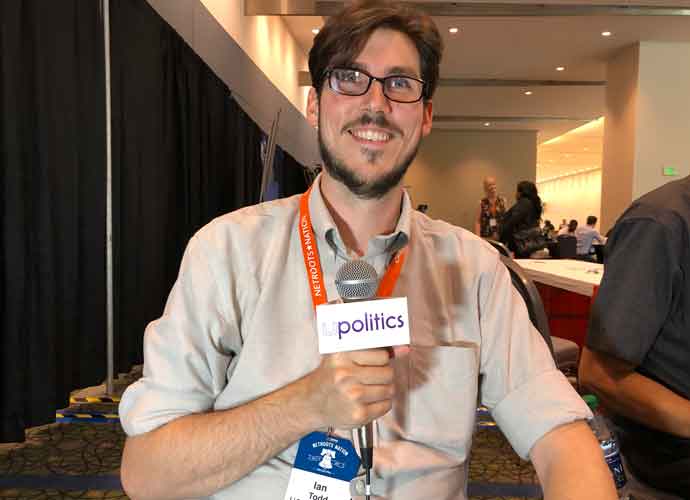 Ian Todd, a young Democrat running for Congress in Minnesota in 2020, is determined to help bring real change to the state.

The Air Force veteran, who is running in Minnesota’s sixth congressional district, talked to uPolitics exclusively about his campaign, the origins of his interest in politics, and U.S. Rep. Tom Emmer (R-Minnesota), who is currently leading the state’s 6th district and who serves as the Chairman of the National Republican Congressional Committee (NRCC).

“The NRCC here lately hasn’t been doing great,” Todd told uPolitics at the Netroots Nation convention for progressive political candidates in Philadelphia. “It’s been catching a lot of flack, and I think that has a lot to do with its new leadership, and a lot to do with the fact that they’ve decided to really make it about being, well… insulting.”

“It’s essentially reading the same way that [President Donald] Trump talks. Every blog post seems like it’s another Trump tweet, and I just don’t think that’s the approach that anybody should be taking in politics these days. We need to have a stronger approach,” he added.

Todd, a working class Arkansas native who once worked as a manager at Subway, worked for six years in the Air Force as a Geospatial Intelligence Analyst. He said the experience left “a bad taste” in his mouth about war.

“One of the big reasons why I’m running is because I want a completely different approach to the way we operate [overseas],” said Todd. “We absolutely need to end all these ridiculous permanent wars that we have and we need to make sure that we’re not getting into new ones.”

Todd also commented directly on Trump’s foreign policy record saying the president is doing a  “miserable job.”  Over the last two years, the Trump administration, which includes hawkish leaders like National Security Adviser John Bolton, has notably increased tensions with Iran — with whom the United States signed a landmark nuclear deal in 2015 — and sent troops to Afghanistan and Syria.

“I will give credit where credit is due, because [Trump] has pulled some troops out and I think that’s more than we ever could have possibly expected from any of the other [2016] Republican candidates,” said Todd. “But at the same time, [pulling troops out of all wars] needs to be done. It’s just been ramping up in more locations and with these provocations against Iran, I think that we’re in a worse position right now than we ever were before [Trump] got in.”

Todd added that the Trump administration’s retaliatory trade tariffs against China have severely hurt Minnesota’s sixth congressional district, as most of it is comprised of rural areas.

“Soy is one of our main exports, and it has been hit incredibly hard, so that’s really tough on our farmers,” he said. “We have entirely too many factory farms trying to take over these family farmers. I don’t want that to happen. I don’t want the future of our food to be in the hands of so few people.”

Todd added he is also focusing his 2020 campaign on three other major issues: getting corporate money out of politics, pushing for Medicare-for-All and combatting climate change, all of which directly affect his Minnesota district.

He noted how soil erosion due to the increased rainfall in the district is hurting farmers in Minnesota’s sixth, as well as the cold temperatures the area suffered during this past winter’s “polar vortex.”