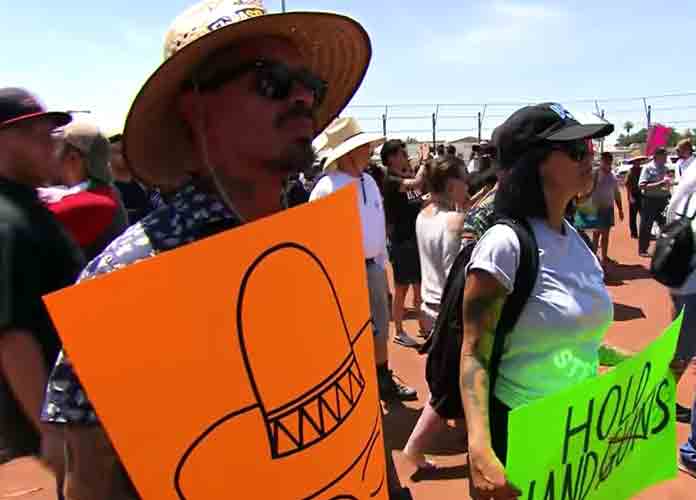 A crowd in El Paso, Texas protested President Donald Trump‘s visit to the city on Wednesday in the wake of a mass shooting over the weekend that killed 22 people, and demonstrators faulted Trump for the tragedy because of his anti-immigrant and racist rhetoric.

Patrick Crusius, the 21-year-old perpetrator behind the shooting, posted a white nationalist manifesto online before the massacre. In the document, he railed against a “Hispanic invasion of Texas” and even cited Trump’s rhetoric and views on immigrants multiple times throughout it.

Several protesters in El Paso rebuked Trump and his administration for their hard-line immigration policies like the construction of the wall along the U.S.-Mexico border and separating immigrant families. In his State of the Union speech earlier this year, Trump called El Paso “one of our nation’s most dangerous cities,” something local press took severe issue with, as he appeared to link crime in the city predominantly to Latinos and immigrants.

Many Trump supporters donning “Keep America Great” red hats also faced off against protesters in El Paso. Some opponents noted that the president has substantial backing in the town because of his administration’s contributions to its economy, especially the job market in the oil and construction industries.

“A lot of people try and say, ‘Look at the good he’s done here, bringing money and jobs,’ but I believe our generation is more focused on morals and not money,” said 21-year-old college student Victoria Perches told Buzzfeed. “We think twice. We understand words have power.”

“I know that it’s hard that this terrorist wrote the same words that he was coming to El Paso to kill Hispanics because of the ‘invasion of Hispanics,'” Garcia shouted. “But let me tell you one more thing: We remember those words already. Somebody has been saying those words and those words … were coming from the White House and the president of the United States.”

“Let me say this clear and loud: Trump is responsible, and he is part of the problem,” Garcia added as the crowd roared and chants of “Trump needs to pay” began.

Trump and several prominent Republican lawmakers blamed violent video games and mental illness for mass shootings like the one in El Paso. These claims were quickly criticized by Democrats and others who cited studies showing evidence that there is no demonstrable link between video games and violent behavior and that mentally ill people are more likely to be the victims of shootings rather than perpetrators.

Similar protests were held against Trump in Dayton, Ohio this week after the president visited the town where nine people were killed and dozens more were injured in a nightlife district over the weekend.