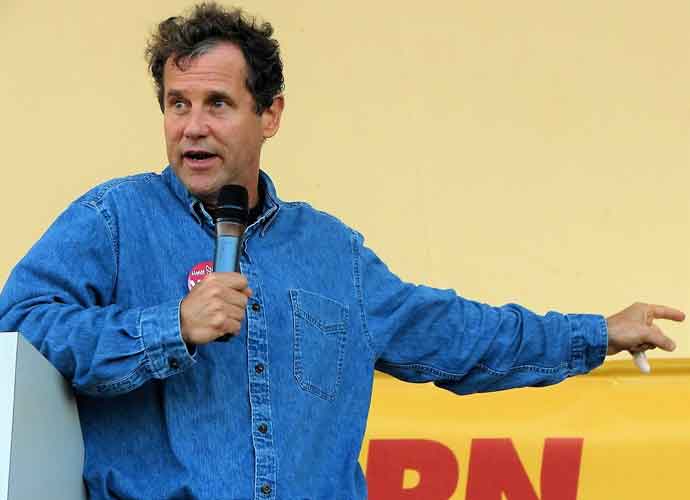 President Donald Trump went after a pair of Ohio Democrats on Wednesday who accompanied to a hospital in Dayton to visit victims and first responders of the weekend’s mass shooting.

Trump blasted Dayton Mayor Nan Whaley (D) and Sen. Sherrod Brown (D) by complaining that they “misrepresented” the encounter with victims at the hospital.

In a pair of tweets Wednesday afternoon, the president called the visit “warm and wonderful” and said it was filled with “tremendous enthusiasm & even Love.”

Trump then mocked Brown for considering a 2020 presidential bid earlier this year but then rapidly deciding against entering the race.

“Then I saw failed Presidential Candidate (0%) Sherrod Brown & Mayor Whaley totally misrepresenting what took place inside of the hospital,” he continued. “Their news conference after I left for El Paso was a fraud. It bore no resemblance to what took place with those incredible people that I was so lucky to meet and spend time with.”

….misrepresenting what took place inside of the hospital. Their news conference after I left for El Paso was a fraud. It bore no resemblance to what took place with those incredible people that I was so lucky to meet and spend time with. They were all amazing!o

White House social media director Dan Scavino Jr. also lambasted “disgraceful politicians” Brown and Whaley for “lying” about Trump’s visit to the Dayton hospital and for “politicizing” Sunday’s shooting in a nightlife district, where nine people were killed and more than 20 were injured.

“The President was treated like a Rock Star inside the hospital, which was all caught on video. They all loved seeing their great President!” Scavino added on Twitter.

..The President was treated like a Rock Star inside the hospital, which was all caught on video. They all loved seeing their great President!

Whaley and Brown told local press that they implored Trump to support background checks for firearm purchases and “red flag” laws that allow law enforcement to confiscate guns from people who are deemed a danger to themselves and others. The two Ohio Democrats also asked the president to back federal programs that grant funding and other support to mental health initiatives.

Whaley also wrote on Twitter that she was confused over Trump’s rebuke of her and Brown after the visit, adding she believes the victims and first responders felt “comforted” by the president’s visit to the hospital. Whaley also said she hoped Trump “actually does something on gun control.”

Not sure what the President thinks @SenSherrodBrown and I misrepresented. As we said, the victims and first responders were comforted by his presence. Let’s hope he’s not one of these all talk, no action politicians and actually does something on gun control. #DoSomething

Whaley also said in a CNN interview this week that she told Trump he had the opportunity to “do something [Barack] Obama couldn’t do” about gun reform by implementing an assault weapons ban.

“[Trump] was kind of intimating that President Obama didn’t get the assault weapon [ban] passed, saying ‘Well, why didn’t Obama get this done?'” Whaley said on CNN. “Sen. Brown said, ‘Look, he didn’t have the votes.’ … I said ‘maybe you can get the votes, Mr. President, you can do something that Obama couldn’t do. How about you get the votes for the assault weapons ban?'”

Like El Paso, Texas — where 22 people were killed in a separate mass shooting at a Walmart on Saturday — Dayton has been the site of protests against Trump’s visit.