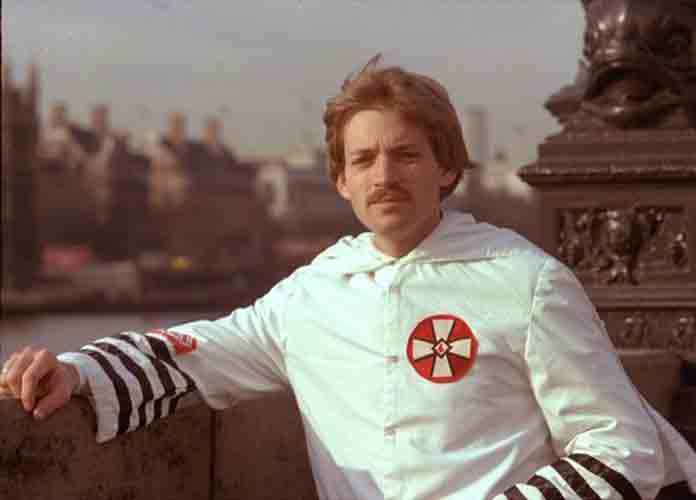 English: David Duke outside the the House of Parliament in London in 1978. (Wikipedia Commons. Author: Associated Press)

David Duke made some bold claims on Twitter last week.

The 68-year-old white supremacist and former Grand Wizard of the Ku Klux Klan, who is a prominent supporter of President Donald Trump, tweeted on Thursday afternoon that he and the president were “right” about threats made to Jewish centers last year being “false flags.”

Duke mentioned this to compare it to the series of packages with bombs that were mailed to prominent anti-Trump critics last week. Duke suggested the news about this was meant to divert attention from “caravans” of migrants crossing into the U.S. from Latin America and from violence perpetrated by Democrats.

When Jewish Center Threats occurred last year, I said they may be false flags from Israel to demonize those who morally oppose Tribalist Zionist Global Power. I &Trump were Right! Now Bomb threats on Trump haters? Are we right again? Divert focus from INVASION & Demo Violence? pic.twitter.com/Pl75LmBeFw

Duke also seemed excited as he posted on Twitter about Brazil’s presidential election on Sunday.

Far-right congressman Jair Bolsonaro —a 63-year-old populist known for his sexist, racist, xenophobic and homophobic views — won Brazil’s election with around 55 percent of the total vote, defeating opponent Fernando Haddad. Bolsonaro is the latest in a series of far-right, populist foreign leaders to be elected to top positions in their respective countries, like Hungary’s Viktor Orban and Italy’s Matteo Salvini.

It was also announced early Monday that German Chancellor Angela Merkel will not seek re-election when her term ends in 2021. Merkel has led Germany since 2005.

Today BOLSONARO WINS!-MERKEL OUT – I am only on on Patrick Slattery/ RBN National Bugle Show Today 1PM ET as Rense Radio Network is getting an internet upgrade of connection speeds needed cause of massive growth of listeners in the past few weeks. Also today will be Mark Collett

Duke — who was recently played by actor Topher Grace in Spike Lee‘s film BlacKkKlansman — has repeatedly stated his support for Trump since the latter took office. Duke was seen at the alt-right white nationalist rally organized by Unite the Right in Charlottesville, Virginia in August 2017.

In August, Duke praised Trump for instructing Secretary of State Mike Pompeo to investigate the plight of white farmers in South Africa, who were allegedly being killed in mass numbers.

Duke tweeted at the time that Russia had agreed to take in 15,000 White South Africans.

The former KKK leader has also re-tweeted Trump several times before, like he did with this tweet:

There is great anger in our Country caused in part by inaccurate, and even fraudulent, reporting of the news. The Fake News Media, the true Enemy of the People, must stop the open & obvious hostility & report the news accurately & fairly. That will do much to put out the flame…