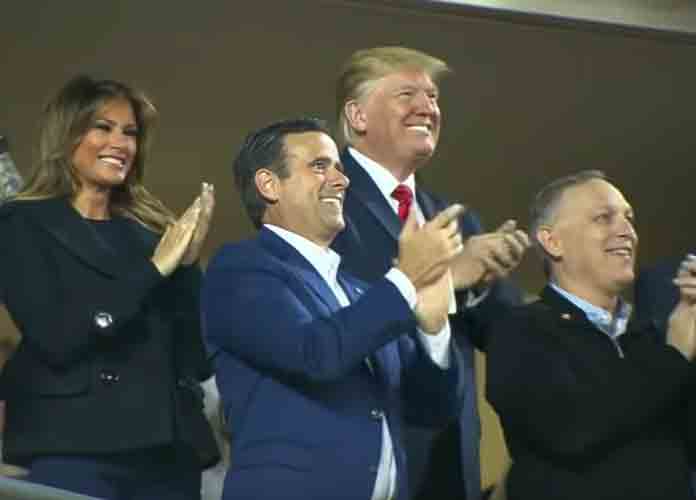 President Donald Trump was heavily booed by baseball fans during Game 5 of the World Series in Washington on Sunday.

The crowd at Nationals Park treated Trump to chants of “lock him up!” while some held up a large banner reading “Impeach Trump!” Trump’s appearance at the Houston Astros’ 7-1 win marked his first at a Major League Baseball game since taking office. The president — who earned 4 percent of the vote in Washington in the 2016 election — attended the game alongside First Lady Melania Trump and multiple Republican lawmakers, including Reps. Kevin McCarthy (R-California) and Matt Gaetz (R-Florida) and Sen. Lindsey Graham (R-South Carolina).

Trump was introduced at Nationals Park moments following the third inning during a salute to military veteran, and the boos and angry chants quickly started circulating. Fans’ rebuke of the president came on the same day he announced the death of ISIS leader Abu Bakr al-Baghdadi. Trump continues to be the subject of an impeachment inquiry by House Democrats for his efforts to solicit help from foreign governments for personal or political gain.

Full on “LOCK HIM UP! LOCK HIM UP!” chants heard throughout the crowd at Nats Park after President Trump was announced and shown on screen here #WorldSeries pic.twitter.com/1ktVXkHYFy

Many media figures, politicians and celebrities voiced a wide range of reactions to the crowd’s treatment of Trump. Some supported the behavior, while others — like MSNBC host and frequent Trump critic Joe Scarborough — condemned it:

If you think that democracy is strengthened by calling for the arrest of political opponents, you’re as ignorant and illiberal as Trump himself. Delete your account and read some civics.
Stop embarrassing yourself.

“Folks that booed at a baseball game just ’cause politics didn’t go their way are unamerican sore-losers who don’t respect the Constitution.”

— Man who has said he will use his AK-15s to murder Americans if Trump is impeached.#LockHimUp https://t.co/SA9WTcmPoF

Actually, a crowd spontaneously calling “Lock him up!” may be exactly what the world needs from us right now — POTUS is our greatest threat to national security/democracy. Letting the world know Americans see this may be the best foreign relations we’ve had since 2016. #LockHimUp https://t.co/pNH3osG5Ie

Peep the dexterity of the crowd. They boo that piece of crap and the complicit #ThirdLady and then clap for the service men and women when they flash on the screen. Skills! #ISaluteYouAmerica! #LockHimUp https://t.co/0lazcHpZTR

Trump also did not throw out the ceremonial first pitch at Sunday’s game, a tradition many past presidents have followed when attending a World Series matchup in the nation’s capital. This year marks the first time since 1933 that Washington has reached the national championship series, dubbed the “Fall Classic.” Chef Jose Andres, a Trump opponent, tossed out the first pitch instead.

The Astros now lead the World Series 3-2 and will host the Nationals for Game 6 on Tuesday night.