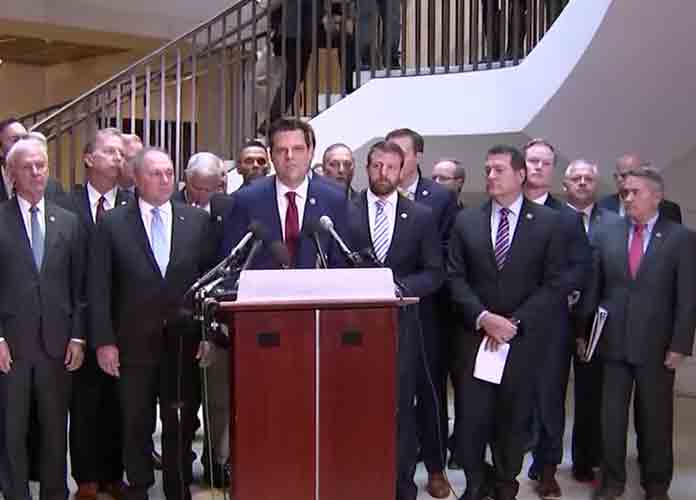 More than 20 Republican lawmakers on Wednesday invaded a closed-door hearing of a top defense official in protest of the Democratic-led impeachment inquiry into President Donald Trump.

In addition to their sit-in, top-ranking GOP lawmakers wrote a letter to House Intelligence Committee Chairman Adam Schiff (D-California) demanding that the whistleblower who voiced concern about Trump’s quid pro quo with Ukraine testify publicly. Many Republicans brought their cellphones — as well as pizza and snacks — to the secure briefing room, known as the sensitive compartmented information facility. GOP lawmakers’ protest violated security protocols because House rules state that only committee members and authorized officials are allowed to attend hearings like Cooper’s.

Rep. Matt Gaetz: “We’re going to go and see if we can get inside.”

Capitol Police and sergeant at arms were reportedly contacted after Republicans refused to leave the deposition room. Rep. Bradley Byrne (R-Alabama) was seen screaming at Schiff, although the House Intelligence chairman did not respond.

REPUBLICANS STORM HEARING: A day after explosive testimony from the top U.S. envoy to Ukraine, a GOP group stormed a secure room where a Pentagon official was slated to testify, demanding the impeachment hearing be made public. @marykbruce reports. https://t.co/yy0LxG0L5w pic.twitter.com/nBLxG78xao

Cooper, whom the Pentagon tried to block from appearing before Democratic House investigators, was scheduled to testify about her knowledge of the Trump administration’s effort to withhold military aid to Ukraine in exchange for an investigation into Joe Biden. The hearing ultimately lasted less than four hours.