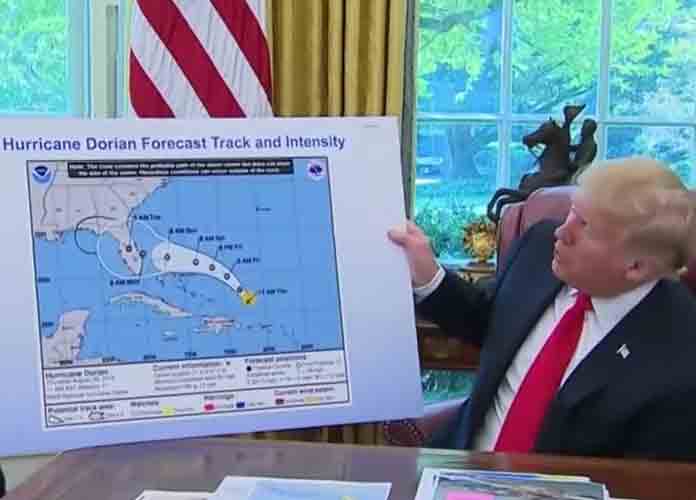 The president then told the press he was unaware the map showing the storm’s path had been changed.

“We got lucky in Florida. Very, very lucky indeed,” Trump told reporters when using the map in an Oval Office briefing. “We had actually, our original chart was that it was going to be hitting Florida directly.”

The map Trump presented, which acting Homeland Security Secretary Kevin McAleenan showed on the desk in the Oval Office, highlighted what looked like a Sharpie-drawn addition to the end of the hurricane’s originally forecast trajectory. Dorian was previously projected to head toward the Gulf of Mexico and Alabama’s southern tip.

Dorian had been graded as high as a Category 5 storm but has more recently been downgraded to Category 3. The hurricane first primarily affected Florida and the Bahamas but has since been making its way up the East Coast, including the Carolinas.

“That would have affected a lot of other states,” Trump added, referencing the map. “But that was the original chart. It was going to hit not only Florida, but Georgia. It could have — it was going toward the Gulf. That was what was originally projected, and it took a right turn, and ultimately, hopefully we’re going to be lucky.”

Trump also doubled down on his assertion about Hurricane Dorian approaching Alabama and lashed out at the media for mocking him.

“I accept the Fake News apologies!” Trump wrote in a tweet that included what he claimed to be the “originally projected path of the Hurricane in its early stages.”

This was the originally projected path of the Hurricane in its early stages. As you can see, almost all models predicted it to go through Florida also hitting Georgia and Alabama. I accept the Fake News apologies! pic.twitter.com/0uCT0Qvyo6

The National Weather Service, which is based in Birmingham, Alabama, tweeted Sunday that Dorian is not projected to hit the state.

Alabama will NOT see any impacts from #Dorian. We repeat, no impacts from Hurricane #Dorian will be felt across Alabama. The system will remain too far east. #alwx

On Thursday, the Carolinas were seeing up to eight-foot surges of rain and winds of up to 115mph due to the effects of Dorian.