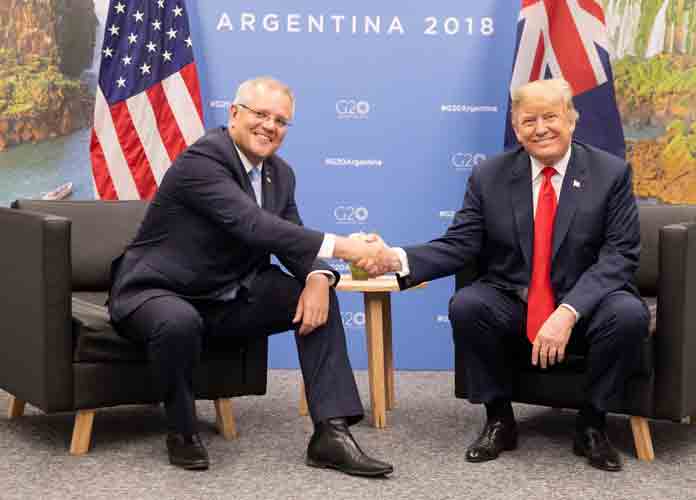 President Donald Trump pushed Australian Prime Minister Scott Morrison to assist U.S. Attorney General William Barr with the evaluation of the origins of the Russia investigation, it was reported Monday.

According to The New York Times, an official with knowledge of Trump’s phone call with Morrison said the Australian president was one of many world leaders Trump contacted to ask for help with the Justice Department’s assessment of the beginnings of the Russia inquiry. The unnamed official also claimed Barr knew of the conversation between Trump and Morrison.

Deputy White House Press Secretary Hogan Gidley said in a statement to CNN that the administration does not believe Trump’s discussion with Morrison was cause for concern.

“This call relates to a DOJ inquiry publicly announced months ago to uncover exactly what happened,” Gidley told the network. “The DOJ simply requested that the President provide introductions to facilitate that ongoing inquiry, and he did so, that’s all.”

A spokesperson for Australia’s government also said in a statement that the country is prepared to cooperate with Trump on any matters related to American election interference.

Earlier this year, former special counsel Robert Mueller concluded that there was insufficient evidence to determine that Trump and his 2016 campaign associates colluded with Russia during the presidential election. Mueller also said that although Trump was not found guilty of obstruction of justice, he was not cleared of this charge either. U.S. Attorney John Durham is currently leading the Justice Department’s review of the origins of the probe into Russian interference in the 2016 election. Department officials reportedly pointed out they believe Trump and Barr seeking help from foreign governments to probe the origins of alleged 2016 election meddling is appropriate and distinct from the Ukraine controversy.

Barr has faced severe criticism and even calls of impeachment in recent days. The attorney general began drawing intense scrutiny after it was reported Monday that he participated in the call between Trump and Ukraine’s president in which the former asked the latter to investigate Joe Biden and his son.