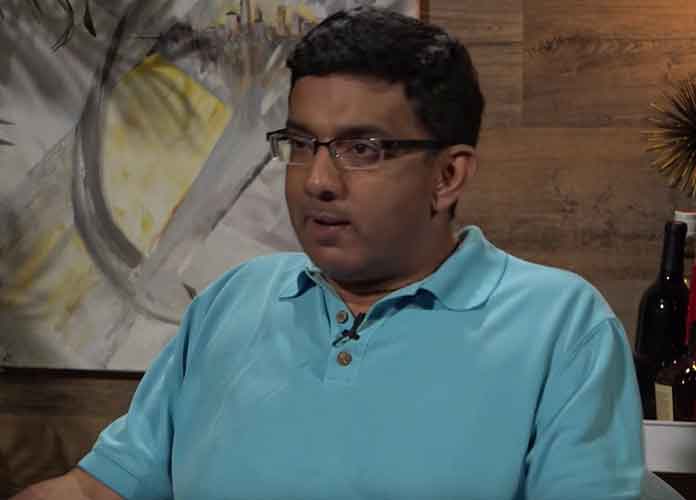 D’Souza pled guilty in 2014 to making illicit campaign donations to Wendy Long, a former Republican candidate for the Senate in New York. According to The New York Times, D’Souza and Long were friends from college and he gave $20,000 in “gifts” to her Senate bid. These were determined to be “straw donations” made to avoid limits on contributions. D’Souza, 57, received a $30,000 fine and a five-year probation sentence, which included eight months in a supervised “community confinement center.”

Trump said in a tweet that D’Souza “was treated very unfairly by our government!”

An Indian-American who was born in Mumbai, D’Souza is know for his extreme right-wing views and for pushing conspiracy theories on cable news shows and Twitter, as well as in his books and documentary films. A prominent Trump supporter and fierce Barack Obama opponent, D’Souza made a documentary in 2012 called 2016: Obama’s America, in which he sharply criticized the former president, calling him a socialist. D’Souza also tweeted photos that called Obama a “gay Muslim,” and also once referred to the former president as “grown-up Trayvon,” referring to Trayvon Martin, an unarmed black teenager who was killed by a white neighborhood patrol watchmen in Florida in 2012. He also said Obama is “obsessed” with his father and that he tried to push his father’s Kenyan colonialist agenda.

“What happened here is Obama and his team, Eric Holder, Preet Bharara in New York, these guys decided to make an example of me, and I think that the reason for this was Obama’s anger over my movie that I made about him,” D’Souza said on Fox and Friends.

Bharara tweeted the following on Thursday, while sharing a link to an article about D’Souza’s guilty plea in 2014.

The President has the right to pardon but the facts are these: D’Souza intentionally broke the law, voluntarily pled guilty, apologized for his conduct & the judge found no unfairness. The career prosecutors and agents did their job. Period. https://t.co/bA3I8vs4QQ via @politico

Among the other conspiracy theories D’Souza has pushed are that the Las Vegas shooting was a hoax perpetrated by an anti-Trump activist and that the white nationalist rallies in Charlottesville, Virginia in August 2017 were staged.

D’Souza also mocked a woman who accused Alabama Senate candidate Roy Moore of sexual harassment and derided the students who survived the shooting in Parkland, Florida, in February after they unsuccessfully tried to press lawmakers to institute gun reform.

“Adults 1, kids, 0,” D’Souza tweeted while sharing an article reporting that lawmakers refused to approve a bill that would ban assault weapons.

“Worst news since their parents told them to get summer jobs,” he added in a separate tweet about the high schoolers.

Genuine grief I can empathize with. But grief organized for the cameras—politically orchestrated grief—strikes me as phony & inauthentic

D’Souza later apologized for his remarks.

While it aimed at media manipulation, my tweet was insensitive to students who lost friends in a terrible tragedy. I’m truly sorry

Blagojevich was impeached as Governor in December 2008 and charged for allegedly soliciting bribes for appointments of politicians. He was convicted and sentenced to 14 years in prison.

Trump said on Air Force One that “what [Blagojevich] did does not justify” his sentence and that he “shouldn’t have been put in jail.”

Another person the president mentioned a possible pardon for is author and television personality Martha Stewart.

Stewart was convicted in 2004 on felony charges of conspiracy, obstruction of justice, securities fraud and lying to federal investigators about her involvement in a stock trading case.

Both Stewart and Blagojevich were contestants on The Apprentice.