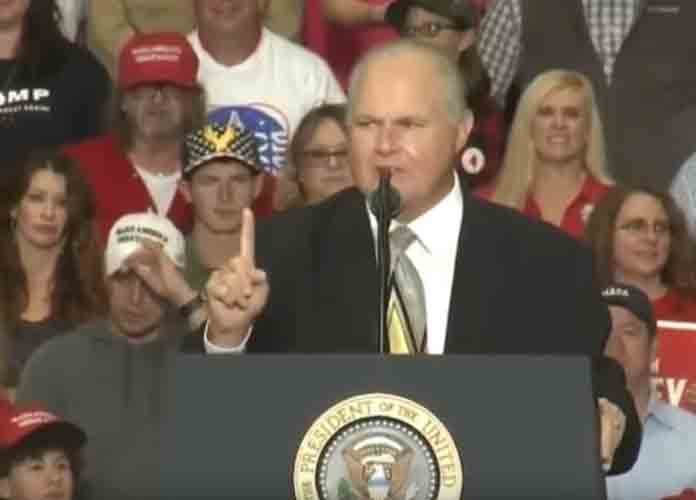 While speaking to the Missouri crowd, Limbaugh went after Democrats and especially Hillary Clinton, whom he accused of having colluded with Russia during the 2016 election, which he also said she “rigged.”

“The Democrats haven’t even accepted that they lost the election in 2016. That’s what this was all about,” Rush said on Monday night.

The crowd quickly started booing and chanting “lock her up!” after Rush mentioned Clinton’s name.

After Rush Limbaugh absurdly accuses Hillary Clinton of colluding with Russia, the crowd breaks out in raucous “lock her up!” chants. #civility pic.twitter.com/YGCWh8diHy

Rush added he believes Washington elites are “envious” of Trump for being able to draw such large crowds for rallies. The radio host said Trump is the only person capable of such a feat.

Rush also mocked Joe Biden, who has been rumored to run for president in 2020, by saying the former vice president “can’t fill a phone booth” of supporters.

The 67-year-old host of The Rush Limbaugh Show is a native of Cape Girardeau.

Trump Doubles Down On Election Lies In First Post-Insurrection Interview