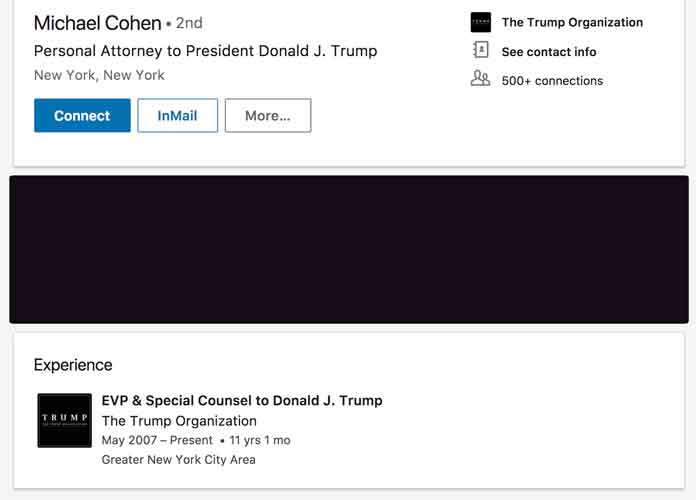 Michael Cohen Still Lists Trump As Only Employer On LinkedIn, Calls Himself ‘Personal Attorney’ To The President

Cohen, Trump’s longtime lawyer and fixer, has had the president as a client since May 2007, according to his page on the professional networking website. He lists his employer as “The Trump Organization” and aside from the title — which is posted at the top of his profile — also lists his current experience as “EVP & Special Counsel to Donald J. Trump.”

Additionally, Cohen and his firm Essential Consultants, LLC have been accused of receiving large payments from dozens of multinational companies like AT&T, drug giant Novartis, investment firm Columbus Nova and Korea Aerospace Industries, allegedly in exchange for information about Trump’s administration and its intended policy decisions with regards to those firm’s industries.

Among the people who have recommended Cohen on LinkedIn are Mark Waltrip, the COO of Westgate Resorts, and Reid Drescher, the President and CEO of Spencer Clarke, LLC.