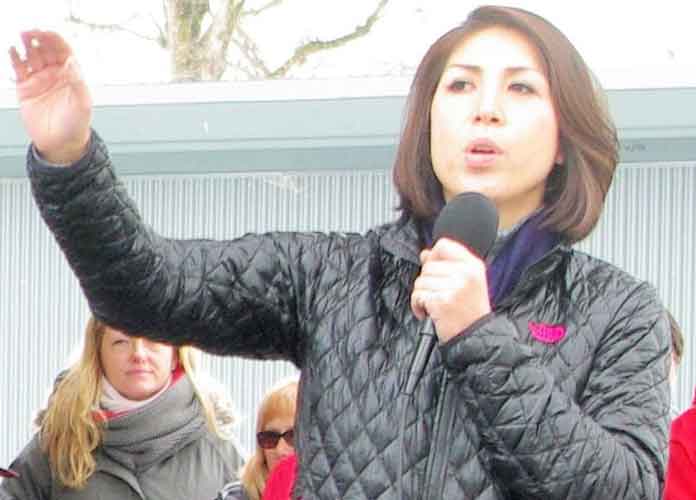 Paulette, one of the few Natives at the rally, is a Member of Idaho House of Representatives and is a member of the Coeur D'Alene tribe. Date 4 February 2017 (Wikipedia Commons. Author: Antone Holmquist from Moscow, United States)

Four states held primaries on Tuesday — Pennsylvania, Nebraska, Idaho and Oregon — and here are the big winners of the elections.

In Pennsylvania, Republican Lou Barletta — the favorite to win the race who received support from President Donald Trump — won the state’s Senate primary with just under 63 % of the vote. Barletta will thus face incumbent Democratic Senator Bob Casey in November’s midterms.

Another Republican, Scott Wagner, won Pennsylvania’s Governor primary on Tuesday with approximately 44.2 % of the vote. He will face current Democratic Gov. Tom Wolf, who has been in office since 2014, in November.

Among the Democratic candidates who won Congressional primaries on Tuesday in Pennsylvania — a state Trump carried in 2016 — were wealthy lawyer Scott Wallace and another attorney, Mary Scanlon.

Democrat Susan Wild, a former Allentown city solicitor, also won the seventh House district with around 33.3 % of the vote.

George Scott, Bibiana Boerio and Ronald Dinicola were the other Democratic congressional winners in Pennsylvania on Tuesday. Seven of the eight women who won Congressional seats in the state were Democrats.

In Nebraska, Jane Raybould — a Lincoln City Council member — won the Democratic Senate primary with around 63.7 % of the vote. Of all the candidates, Raybould is among those who raised the most money for her campaign by far. She will take on sitting Republican Sen. Deb Fischer in November. Fischer has been in office since 2012, and recent polls showed her as having a comfortable lead over Raybould.

Another big Democratic winner in Nebraska was local nonprofit leader Kara Eastman, who narrowly defeated favorite Brad Ashford in the party’s second Congressional District race. Eastman is a progressive who favors abortion rights and Medicare for all, and is viewed as the type of candidate who could give Democrats a major boost in the midterms. She will face incumbent Republican Rep. Don Bacon in November. Bacon defeated Ashford in 2016 by just one percentage point.

Nebraska’s second House district has not always voted the same in all elections. Barack Obama took it in 2008, but so did Trump in 2016.

In Idaho, it was Brad Little who emerged as the winner in the Republican Governor primary with around 37.2 % of the vote. Little, an establishment candidate, is currently the state’s lieutenant governor. He defeated Rep. Raul Labrador, who had been a visible member of the conservative House Freedom Caucus.

In the Democratic primary race for Governor, Paulette Jordan won with approximately 58.5 % of the vote. Jordan, 38, is a two-term state lawmaker in Idaho.

Idaho’s midterm results will be particularly important because the state is one of many that is looking to expand Medicaid.

Finally, Rep. Knute Buehler won Oregon’s Republican primary for Governor with around 46.6 % of the vote. That crowded race counted 10 candidates, plus a write-in candidate.

Buehler will take on current Democratic Gov. Kate Brown in November. Brown replaced fellow Democrat John Kitzhaber as Oregon’s governor in February 2015 after the 71-year-old Kitzhaber resigned in the wake of a corruption scandal involving his fiancee.

Oregon has been dealing with budget issues and has had Democratic Governors for the last 32 years.