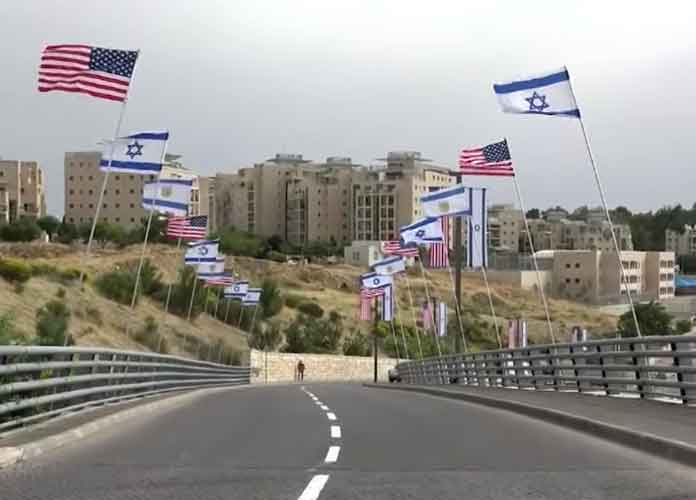 US Embassy in Israel

Israeli Forces Kill At Least 41 Palestinians In Protests Over Opening Of U.S. Embassy In Jerusalem

The conflict in Gaza reached a new level on Monday, when Israeli forces killed at least 41 Palestinians protesting the move of the U.S. Embassy from Tel Aviv to Jerusalem.

Protesters Killed On Day Of U.S. Embassy Of Jerusalem Opening

Approximately 1,700 Palestinians have also been injured in the riots.

President Donald Trump — who has recognized the holy city of Jerusalem as Israel’s capital — said in a tweet that the unveiling of the new embassy was “A great day for Israel.”

U.S. Embassy opening in Jerusalem will be covered live on @FoxNews & @FoxBusiness. Lead up to 9:00 A.M. (eastern) event has already begun. A great day for Israel!

Trump’s daughter Ivanka Trump and son-in-law Jared Kushner and Treasury Secretary Steven Mnuchin were among those present at the embassy’s opening ceremony, which coincides with the 70th anniversary of the formation of the state of Israel.

Trump first severely angered many Palestinians in December when he officially recognized Jerusalem as the Israeli capital.

Palestinians began saying that the U.S. could no longer be trusted in helping to negotiate peace in the region. Palestine’s citizens hope to make East Jerusalem become the capital of a state they wish to set up in the occupied West Bank and the Gaza Strip.

“What a moving day for the people of Israel and the State of Israel,” said Netanyahu.

According to The New York Times, more protests are expected to ravage Jerusalem and the Gaza border on Tuesday. This would be no coincidence, as Palestinians observe May 15 as the anniversary of the nakba, or “catastrophe.” The day commemorates the expulsion or escape of hundreds of thousands of Arabs from the newly formed Jewish state in 1948.

The impoverished area of Gaza is governed by the Palestinian Sunni-Islamist fundamentalist group Hamas.