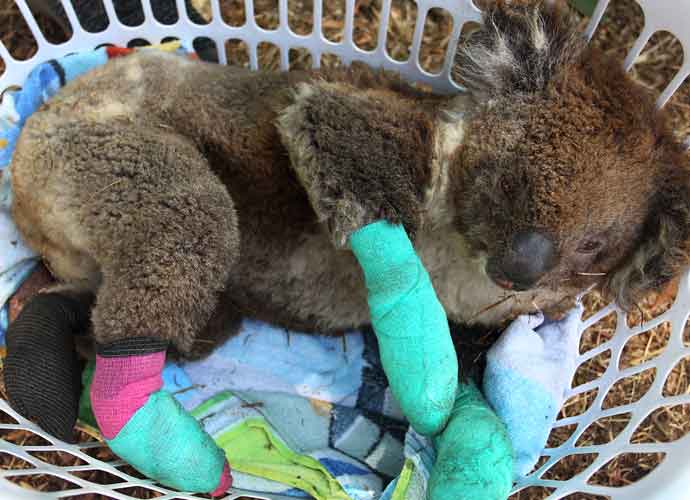 KANGAROO ISLAND, AUSTRALIA - JANUARY 08: An injured koala rests in a washing basket at the Kangaroo Island Wildlife Park in the Parndana region on January 08, 2020 on Kangaroo Island, Australia.

Volunteer and professional forces are working to contain fires across Australia. Kangaroo Island, a national park and tourist attraction off of Australia’s Southeast coast, is dealing with the most damages.

Fires on Kangaroo Island are detrimental to the country’s biodiversity.  Fires have consumes almost half of the 1,700-square-mile island, forcing rescuers to go from tree to tree in order to save what they can.

Many species are in danger because of the fires, including koalas living on the island.  Mitchell, who has owned and run the Kangaroo Island Wildlife Park with his wife, Dana, told the L.A. Times, “There’s not much that isn’t threatening koalas at the moment. Without quick intervention, koalas that survived the fires are going to die of starvation.”

Although there have historically been fewer human casualties during these fires than others, the damage to wildlife is incomprehensible. Many experts say that  climate change is to blame. Katja Hogendoorn, a professor at the University of Adelaide’s school of agriculture, food and wine said, “These incomprehensibly large and devastating fires are caused by a combination of lower rainfall and higher temperatures, both consequences of climate change, and here to stay and worsen, unless drastic action is undertaken worldwide. As the driest and hottest continent, Australia is at the forefront of this environmental disaster.” It’s clear to say many already endangered animals are at further risk and whole food chains are being affected.

For example, the dunnart, an already endangered mouse-like marsupial, relies on ground vegetation for protection from birds and feral cats. With most of that vegetation gone, it leaves little shelter options for the marsupial.

Michaela Haska, the wildlife park’s head keeper, said of the dunnarts cockatoos, ““We’re not sure if they’ll be able to come back. It might be the breaking point for them.” There’s a very high chance the dunnart, like many other animals affected by the fires, will go extinct.

Many animals have died, and those left are uncharacteristically moving towards humans for help. Many are disoriented or blind. Ordinary people’s homes are turning into animal hospitals. One family has taken in over 70 koalas; all nestled in laundry baskets with bandages on their paws.

The loss of koalas on Kangaroo Island have been extremely difficult; not just because they’re endangered, but because they are the world’s only chlamydia-free koalas left.

Those on the island are surrounded by loss. 65 homes in the area have been destroyed by the fires, taking human and wildlife with it. It’s not certain how much wildlife has been lost, as many experts are predicting the fires to continue until March.