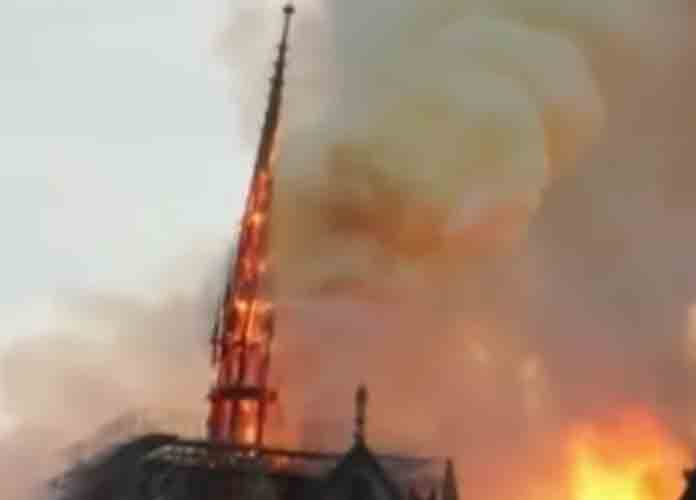 The roof above the Notre Dame cathedral, one of the most iconic symbols of French history, collapsed amid a devastating fire that ripped through the structure on Monday afternoon.

The fire broke out at about 6:30 p.m. in the heart of Paris. As the last wave of tourists for the day were trying to get in, the doors were abruptly shut without any explanation. Moments after, smoke started to come out of the spire, which is the tallest part of the building, followed by orange flames that spread swiftly.

It is still unknown what caused the fire or whether anyone was injured, said André Finot, a spokesman for the cathedral, to the New York Times.

To put out the fire, the French Interior Ministry mobilized 400 firefighters. The firetrucks had difficulties reaching the scene due to the daily rush hour.

This fire, occurring less than a week before Easter, was met by horror throughout the nation and the world.

“Notre Dame of Paris in flames. Emotion for a whole nation. Thoughts for all Catholics and for all French. Like all our countrymen, I’m sad tonight to see this part of us burn,” French President Emmanuel Macron said on Twitter.

The president was scheduled to deliver an important policy speech about how he would heal the nation from months of “Yellow Vest” demonstrations that had defaced landmarks and disfigured streets in the capital.

He subsequently postponed his speech.

Macron arrived at the scene not long after the fire broke, accompanied by Paris Mayor Anne Hidalgo, French Prime Minister Édouard Philippe and first lady Brigitte Macron. He was also joined by the Paris prosecutor, who opened an investigation into the fire.

As the flames continued to spread, thousands onlookers stared in silence at the structured that had been standing since the 13th Century.

Notre Dame’s foundation stone was laid in 1163 by Pope Alexander III and was built throughout the 12th and 13th centuries. It is not just considered a landmark for Paris, where it sits comfortably in Île de la Cité, a small island in the middle of the city, but for all the world.

The cathedral is visited by about 30,000 people a day and around 13 million people a year.