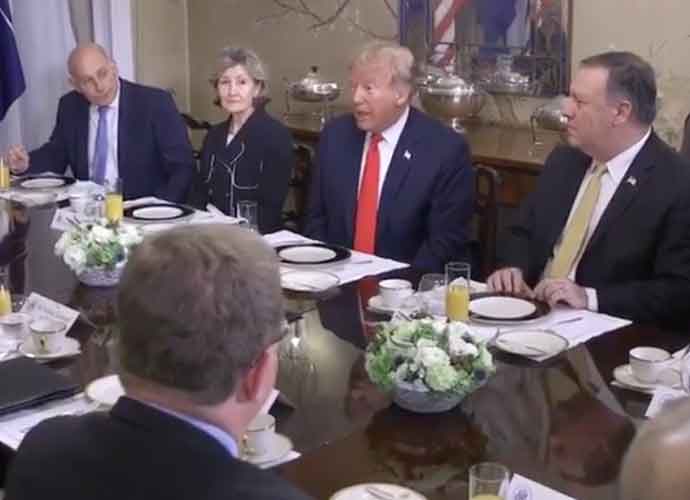 On Wednesday, White House aides visibly squirmed in their seats as President Donald Trump declared Germany to be “a captive of Russia” during recent NATO talks.

The meeting did not seem to play over well for the president’s senior officials who appeared visibly uncomfortable with the president’s accusatory remarks. U.S. ambassador to NATO Kay Bailey Hutchison and White House Chief of Staff John Kelly can be seen grimacing and avoiding eye contact with NATO officials seated across the table as the president lambasted Germany over its dependence on Russia for energy resources.

“It’s very sad when Germany makes a massive oil and gas deal with Russia where we’re supposed to be guarding against Russia and Germany goes out and pays billions and billions of dollars a year to Russia,” said Trump. “If you look at it, Germany is a captive of Russia.”

The line “captive” triggered an immediate reaction from officials. Rather than nodding in agreement, Secretary of State Mike Pompeo turned his head away from the president and looked down at his plate. Meanwhile, Kelly pursed his lips and Hutchison flinched in response.

The Washington Post commissioned an analysis of Kelly’s reaction was done by Patrick Stewart, a professor “certified in the Facial Action Coding System.” He noted that Kelly’s body language indicated that he was clearly “displeased.” Mary Civiello, an expert with 15 years of experience studying body language, agreed adding that “Kelly looks like he wants to be anywhere but where he is.”

White House Press Secretary Sarah Huckabee Sanders has since made the excuse that “[Kelly] was displeased because he was expecting a full breakfast and there were only pastries and cheese.”

This is not the first time the Chief of Staff has expressed his disdain for the president. According to four current and former White House officials, Kelly had previously referred to the Trump as “an idiot” on several occasions. Eight officials also said Kelly often portrayed himself as a saving grace of the United States, according to NBC News. He later denied the claims.

A clip of the meeting can be found below:

“Germany is totally controlled by Russia,” Pres. Trump tells NATO Secretary General Stoltenberg as they sit down together for bilateral breakfast ahead of Brussels summit. https://t.co/CmyplgrxzN pic.twitter.com/6RnFk8Drgs

Trump Once Told Chief Of Staff Hitler ‘Did A Lot Of Good Things,’ According To New Book