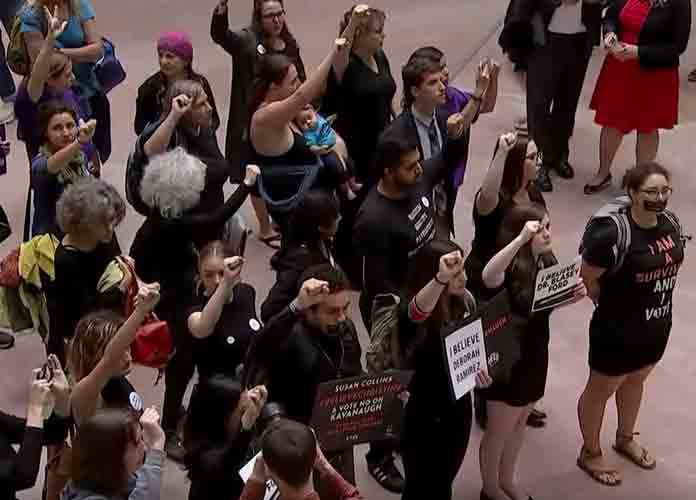 Brett Kavanaugh protesters clash with supporters in Washington, D.C. and around country

Protesters and supporters of Brett Kavanaugh clashed in Washington, D.C., and around the nation on Thursday, as the Supreme Court nominee and his sexual assault accuser, Dr. Christine Blasey Ford, testified before the Senate Judiciary Committee.

In total, 59 people were arrested by police near the Supreme Court Thursday for “unlawful demonstration activities.” Thousands of people across the country rallied to voice support for Ford and other sexual assault victims, with signs like “We believe survivors” and “Believe Women.”

Chants of “No means no, Kavanaugh has got to go” rang through the streets and many women were seen with tape across their mouths. Several protesters were seen wearing black to show solidarity with sexual assault survivors, a trend that multiple celebrities followed as well.

At 12:30 p.m. EST, a moment of silence was held around the U.S. to support victims. Many people raised their fists in the air as a sign of respect.

At 12:30 p.m., the nationwide moment of silence for survivors, the crowd instantly becomes silent, and many raise palms and fists in the air, showing the words “Believe Women.” #KavanaughConfirmationHearings pic.twitter.com/1ZW0DYE7Ou

Several other people were arrested by Capitol Hill police earlier this week.

There is also a social media campaign called #AssaultFreeScotus that was recently launched in support of Ford. One of the primary purposes of the effort was to ask men to make short videos to explain why they believe Kavanaugh’s accuser, a psychology professor who lives in California.

Americans who defended Kavanaugh also took to the streets, however. Signs of “I Stand with Brett” were shown to back the judge, whom Ford accused of assaulting her at high school party in 1982 when she was 15 and he was 17.

Earlier this week, Kavanaugh protesters also forced Texas Sen. Ted Cruz — a member of the Senate Judiciary Committee — out of a restaurant.