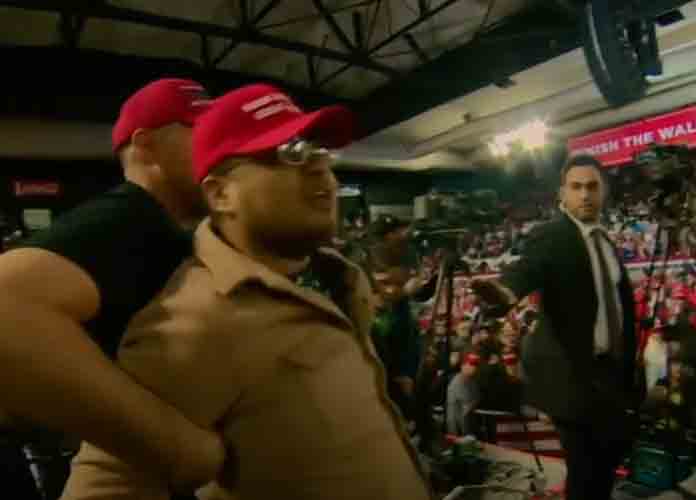 A supporter of President Donald Trump attacked a BBC camera operator at a rally in El Paso, Texas, on Monday night, the news outlet said.

“BBC cameraman Ron Skeans was violently pushed and shoved by a member of the crowd while covering a President Trump rally in Texas last night,” a BBC spokesman said in a statement.

Trump traveled to El Paso to garner further support for his proposed U.S.-Mexico border wall to curb what he views as uncontrolled illegal immigration. Disagreement between him and Democratic lawmakers over the issue led to a record-breaking, 35-day government shutdown. When Skeans was pushed, the president was discussing a decrease in assaults on Latinos, African-Americans and Asian-Americans. The man who shoved the cameraman — and who was wearing a red “Make America Great Again” hat — was eventually restrained by security and escorted out of the venue as he continued to shout “F— the media!” at reporters. Video of the entire incident quickly went viral on social media.

Just attended my first ⁦@realDonaldTrump⁩ rally where my colleague BBC cameraman Rob Skeans was attacked by a Trump supporter. The crowd had been whipped up into a frenzy against the media by Trump and other speakers all night #TrumpElPaso pic.twitter.com/Oiw8osPms3

As the Trump supporter was removed from the event, the crowd reportedly switched its chants from “USA!” to “Let him go!”

We are fighting for all Americans, from all backgrounds, of every age, race, religion, birthplace, color & creed. Our agenda is NOT a partisan agenda – it is the mainstream, common sense agenda of the American People. Thank you El Paso, Texas – I love you! https://t.co/4Lz4PUwKzV

Gary O’Donoghue, a BBC Washington correspondent who attended the Texas rally, claimed the Trump supporter attempted to break the camera while going after Skeans, who is now reportedly physically fine.

Trump has repeatedly blasted nearly every major liberal media outlet since taking office, and his supporters have frequently followed his lead by insulting and threatening journalists at rallies. In July, CNN’s Jim Acosta tweeted a video of Trump supporters shouting disparaging comments at him during an event in Tampa, Florida.

According to The New York Times, Trump tweeted the phrase “Fake News” last year to describe the media at least 174 times. The United Nations and several other human rights organizations have repeatedly denounced his attacks on the press.

Biden Orders Portions Of U.S.-Mexico Border Wall To Be Completed