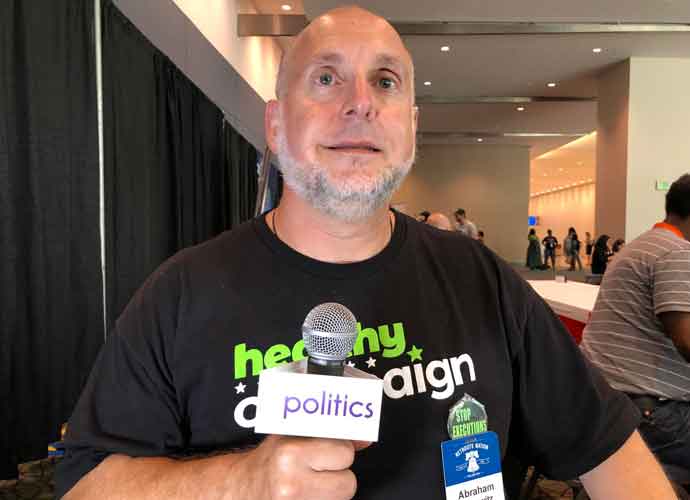 Death Penalty Action is a national non-profit advocacy group dedicated to ending the use of the death penalty as a form of capital punishment for crimes, and is continually working with other organizations and activists to provide information, resources and other forms of support to eliminate the practice.

The organization’s co-director Abraham Bonowitz, an experienced organizer, spoke to uPolitics exclusively last month in Philadelphia at the annual Netroots Nation political convention for progressive political candidates and activists. Bonowitz discussed his advocacy group’s planned projects, how to approach disputes on the issue with the Supreme Court, and more.

“Right now, we are working on several things,” said Bonowitz. “We’ve got a program that we’re building in Ohio called the Journey of Hope: from Violence to Healing, which is led by murder victim family members who oppose the death penalty.”

Bonowitz added that as part of this initiative, Death Penalty Action will collaborate with the Ohio Council of Churches in order to create a conference that can guide Christians and other religious families and individuals on how to approach first-year Gov. Mike DeWine (R).

“[DeWine] is a very Christian Catholic, pro-life guy and we want to make sure he’s hearing the message from people who think the way he does,” Bonowitz added.

Bonowitz also said Death Penalty Action is doing advocacy work in Tennessee, which recently resumed the practice of executions. He added that the state is also led by a newly elected Republican, Gov. Bill Lee, who is religious as well and has many ties to Evangelical Christians.

Bonowitz also noted Death Penalty Action was pleased that six states have abolishing the death penalty: New Jersey, New Mexico, Connecticut, Illinois, Maryland and New Hampshire, the latter of which most recently passed a law in May to end the practice. The group’s director added that Nebraska introduced legislation to abolish the death penalty, although the state chose to decide on the issue via a referendum after the bill was overturned.

“Next on the docket possibly [are] Colorado, Oregon, Washington state, although Oregon is a question mark because they have to pass a referendum to get it out of the Constitution,” said Bonowitz. “But [Oregon] did just pass legislation to restrict and limit it to certain crimes, which are going to make it all but impossible to have death sentences there.”

“In Washington, the state supreme court threw it out, but we still have to pass legislation to get it out,” he added.

Bonowitz also noted he is pleased with several states’ efforts to introduce legislation that includes exceptions for using the death penalty as a form of punishment for people with mental illness. He also praised proposals to require the recording of confessions to crimes during interrogations.

“You would think it would be a no-brainer, but that’s one of the things they don’t do yet. It’s not mandated.” Bonowitz said of the latter proposal. “Doing so will help prevent wrongful convictions.”

How would Death Penalty Action makes its case to the United States Supreme Court to end capital punishment? Bonowitz said concentrating on a specific word in the Constitution’s Eighth Amendment, along with a more focused analysis of executions, would help the organization present a solid argument on the issue to the nation’s highest court.

“The Eighth Amendment is [about] the prohibition of cruel and unusual punishment,” Bonowitz explained. “[The Supreme Court] has already decided that it’s not cruel. But ‘unusual,’ you’d have to be really ignoring the facts to decide that it’s not ‘unusual.’ What I mean by that is you have to look at the death penalty not by state but by county. And when you look at the death penalty by county, you have just a couple of dozen counties out of more than 3,000 that actually use [the practice].”

Bonowitz also revealed that from 2010 to 2015, only 16 “outlier” counties in the U.S. had more than five death sentences. Five of these counties are in California, while the rest are in Oklahoma, Texas, Arizona and Florida. Death penalty Action’s director said his group is also striving to replace district attorneys across the country who support capital punishment with officials who oppose it.

Bonowitz said Death Penalty Action is still planning this strategy to confront the Supreme Court over the issue and said this effort has proved a “challenge” since Justice Anthony Kennedy retired in the summer of 2018. President Donald Trump has also named two heavily conservative judges since taking office, Neil Gorsuch and Brett Kavanaugh, thus pushing the high court’s leaning further to the right.

Also further complicating matters is the fact that last month, U.S. Attorney General William Barr said the Justice Department would reinstate the death penalty after a 16-year moratorium. Five inmates on death row are set to be executed between December 2019 and January 2020.

However, Bonowitz said he remains optimistic because levels of new death sentences, capital indictments and executions have significantly declined across the country in recent years.

“It ups and downs a little bit but in the late 90s, we were seeing almost 100 executions a year,” said Bonowitz. “Now we’re under 30 consistently.”