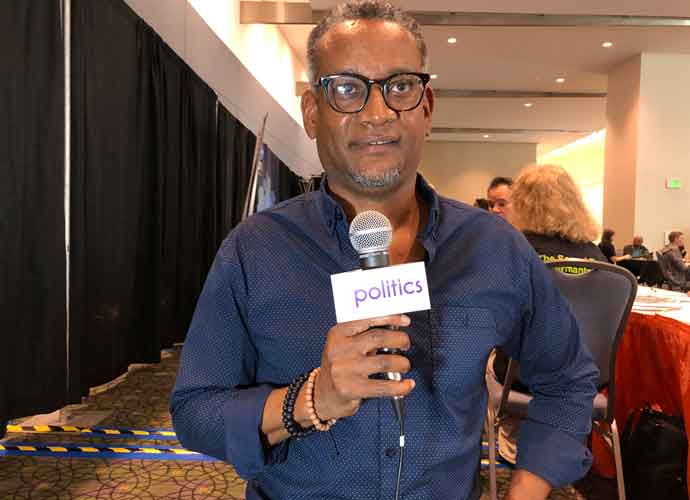 The Center for Constitutional Rights is a progressive, nonprofit organization that provides legal and advocacy support to people who have been oppressed in some form or another.

The group’s director named the Trump administration’s bans on citizens from Muslim-majority nations and on refugees seeking asylum at the southern border as one of the major issues it is fighting today, and said the two hard-line immigration policies and their effects are “connected.”

“We have three pieces of litigation with respect to those two issues,” said Warren. “On the asylum ban, we filed a lawsuit in 2016 when Customs and Border Patrol officers were telling people who were migrating north from Central America that they couldn’t seek asylum because they had to go back to their countries and get a visa.”

He continued: “Here’s what’s wrong with that. Asylum is something that was developed after the horrors of World War II so that people who were fleeing persecution and had an imminent risk of fear and harm would be able to seek safe haven in a new country. So asylum is something that anybody can come into the United States and make a claim for.”

Warren added he believes any migrant who lies about fleeing war, persecution or other dangerous situations in their home country or who cannot prove they are escaping this should not be allowed to enter the United States until they are fully vetted. The Trump administration recently tried to force Central American migrants to first request asylum in countries like Guatemala and Mexico before seeking refuge in the U.S., and one federal judge temporarily approved this policy last month. Warren also revealed that the CCR filed lawsuits to reunite two immigrant families that were separated at the southern border as part of the Trump administration’s zero-tolerance policy for illegal migration.

Warren noted that although the White House’s first two versions of the Muslim ban were ruled unconstitutional by the courts, the amended third version was authorized in part because of the so-called “waiver provision” that dictated that any person coming from the list of nations subjected to the ban — which includes Iran, Syria, Yemen, Libya and Somalia — are required to seek a waiver to enter the U.S. This waiver entails that these migrants need to prove to their embassy or consulate that they have at least one family member like a sibling, an uncle or a cousin living in the U.S.

In June 2018, the Supreme Court upheld that version of the Muslim ban in a 5-4 decision.

“As the [Trump] administration was making that claim — which we at the CCR pretty much knew the Supreme Court was going to go for — we traveled to Djibouti, where people from Yemen, one of the banned countries, had fled because of the civl war and the humanitarian crisis in Yemen,” said Warren. “But what we heard when we got to Djibouti and met with hundreds of people is that there was no waiver process whatsoever.”

The CCR is now fighting for Yemeni families seeking asylum in Djibouti via lawsuits to ensure they can obtain waivers before entering the U.S.

Among the other cases the CCR works on are Israel’s occupation of Palestine, mass incarceration, LGBTQ persecution, war crimes and sexual and domestic violence.

Yep. That’s what I said. pic.twitter.com/lTvRstLZf0