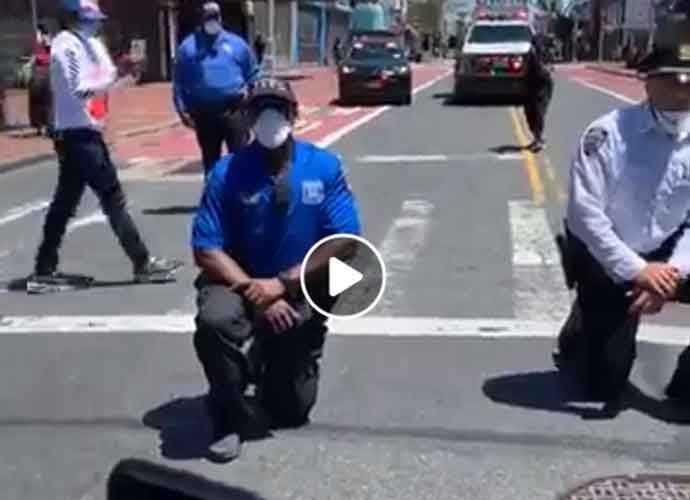 As the protests against racial police violence took place in New York City, some police officers knelt in solidarity with the Black Lives Matter movement.

The video posted by Aleeia Abraham on her Facebook feed shows George Floyd protests taking place in Queens, New York. Protesters were forming a circle, chanting and urging the policemen, who gathered at the scene, to kneel in solidarity with the demonstrators.

Following the chanting, some police officers knelt, the crowd applauding in surprise. The gesture was followed by the protestors proclaiming the names of other black victims, who died during the acts of police arrests.

In other states, some policemen similarly expressed solidarity with the protestors who marched against racial police brutality on Saturday, following the death of 46-year-old Floyd, who died during the arrest procedures. Police officers kneeled during a rally in Coral Gables, Florida. A Michigan Sheriff Chris Swanson marched with the crowd on Saturday, in Flint Township.

“The only reason we’re here is to make sure that you got a voice – that’s it,” Swanson said in a Twitter video clip.

Genesee County Sheriff (Flint, Michigan) Chris Swanson put down his helmet and baton and asked protesters how he could help.

The protesters chanted “walk with us” so the Sheriff joined — and walked alongside the protesters in solidarity.

Abraham, who runs The BlaQue Resource Network activist organization, told CNN she was surprised to see policemen joining the solidarity movement and praised their efforts to stand for the right cause but added she wanted to see a long-term change.