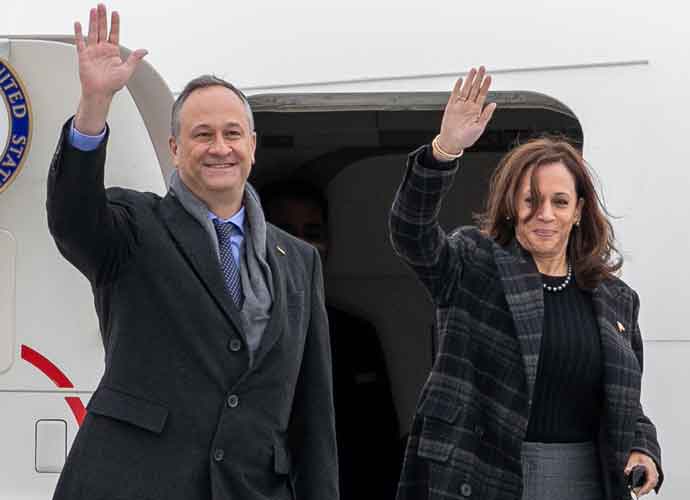 PARIS, FRANCE - NOVEMBER 13: United States Vice President Kamala Harris and her husband Douglas Emhoff are seen leaving France at Orly Airport on November 13, 2021 in Paris, France. The Vice President has been in Paris for five days, during which time she has attended several official events, including the Armistice Day commemoration, and met with French President Emmanuel Macron. (Photo by Marc Piasecki/Getty Images)

Doug Emhoff, the husband of Vice President Kamala Harris, was evacuated on Tuesday after a bomb threat during a visit to Dunbar High School in Washington. D.C.

Emhoff visited the high school to participate in an event honoring Black History Month. He was only there for five minutes before he was abruptly escorted out by Secret Service. According to the Metropolitan Police Department, a call was placed to the school’s front desk around 2:15 p.m. announcing the bomb threat. The caller also threatened there would only be ten minutes for evacuation. Emhoff was removed from the building by 2:18 p.m., police say.

Historically black colleges (HBCUs) have also been under attack in recent weeks. Approximately 17 HBCUs have received bomb threats. Due to universities being easy targets because of their accessibility to the public, more security measures have been enacted to ensure students’ safety.

The FBI has already responded to more than 20 threats to historically black colleges and other institutions this year. At least five suspects have been already been identified from a fake phone number, the FBI said.

Many universities went on lockdown after bomb threats but some have resumed. Maurice Mitchell, national director of the Working Families Party, said, “HBCUs and independent black institutions are targeted because they represent independence and resilience for African Americans, which is a threat to white supremacist ideology.”