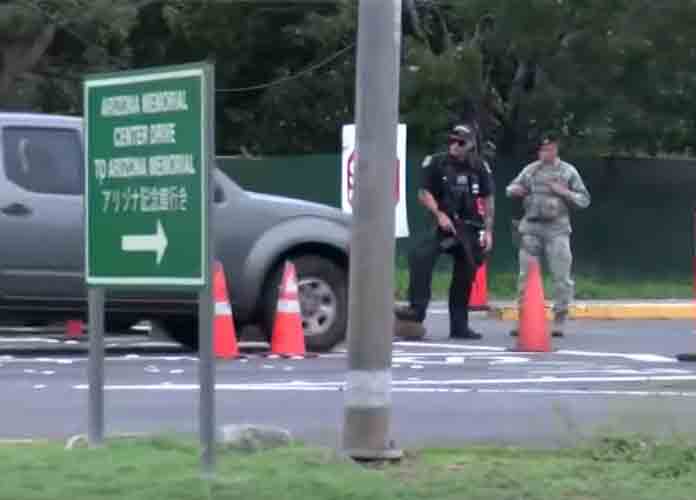 A United States sailor on Wednesday shot three civilians and killed two at the military base in Pearl Harbor, Hawaii before taking his own life.

The tragedy comes just three days before the 78th anniversary of the Japanese bombing on the base that led the U.S. to enter World War II.

According to several reports, the sailor was identified as 22-year-old G. Romero. ABC News reported that Romero used a service weapon to fatally shoot himself and the other people. Pearl Harbor was placed on lockdown after reports of an active shooter surfaced.

Rear Adm. Robert Chadwick, who is the commander of the Navy Region Hawaii, said armed forces would assess whether should be increased ahead of Saturday’s commemorative ceremony, an annual event held at Pearl Harbor.

It was reported that Chadwick said Romero died of an “apparent self-inflicted gunshot wound.”

Hawaii Gov. David Ige responded to the shooting on Twitter:

I join in solidarity with the people of Hawai‘i as we express our heartbreak over this tragedy and concern for those affected by the shooting. Details are still emerging as security forces at Joint Base Pearl Harbor Hickam investigate. #PearlHarbor

Romero had reportedly been tasked with standing watch on the attack submarine USS Columbia, which is stationed at the historic military base in Hawaii for maintenance. It remains unknown whether or not Romero and his three victims knew each other. However, Joint Base Pearl Harbor-Hickam revealed in a tweet that all three people who were shot worked for the Defense Department. One of the victims was 30-year-old Vincent Kapoi Jr. The names of the other two victims have not been released.

The sailor reportedly shot and injured three Department of Defense civilian workers before shooting themself. The incident took place this afternoon at the vicinity of the shipyard’s Dry Dock 2. The base is no longer in lockdown. #PearlHarbor

The base also noted that the surviving shipyard civilian was in stable condition and was being treated at a local hospital.

Joint Base Pearl Harbor-Hickam security forces responded to a reported shooting at a dry dock at @PHNSYIMF. Initial reports indicate the shooter & two shipyard civilian employees are deceased, & one shipyard civilian is in stable condition at a local hospital. 1/5 #PearlHarbor

13 Sailors From USS Roosevelt Now Have Retested Positive For Coronavirus