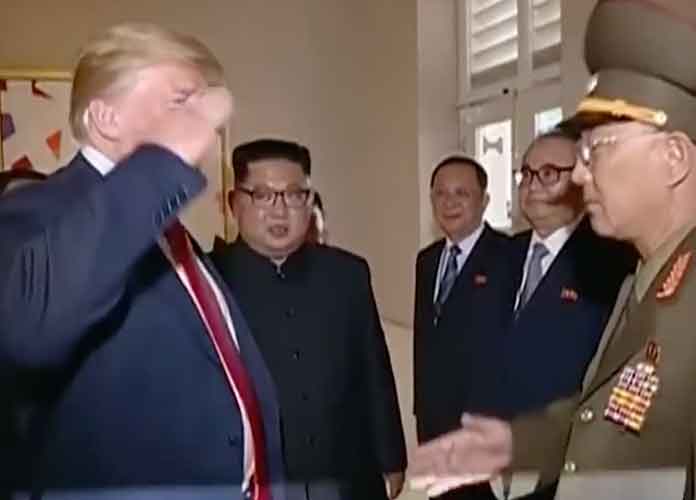 On Thursday, North Korean stated media released footage of Kim Jong-un‘s summit with President Donald Trump that showed the American leader doing something that proved to be quite controversial.

The short video shows Trump meeting with Kim and other North Korean officials, among them a military general. Trump is shown reaching out to shake the general’s hand, but the latter instead saluted the American president. Trump returned the gesture with a salute of his own, a move that sparked outrage among many people on social media.

According to CNN, an unnamed U.S. official told the the network that Trump had been briefed on protocol when visiting foreign countries, and that instructions given to him included not saluting foreign military personnel. North Korea is an authoritarian regime whose government is known for having committed dozens of human rights violations, so Trump’s move is even more shocking for this reason.

The White House stood by Trump’s actions, and called his response to the North Korean general’s salute a “common courtesy.”

“It’s a common courtesy when a military official from another government salutes, you return that,” White House press secretary Sarah Huckabee Sanders said on Thursday.

Early in Barack Obama‘s first term in office, the former president bowed to Saudi Arabia’s King Abdullah. Obama was criticized for the move, and Trump called him an “amateur” at that time.

On social media on Thursday, many people quickly criticized Trump’s salute and noted how this was far worse than when Obama saluted a U.S. military official while holding a coffee cup.

We can be outraged that Trump saluted a North Korean general without invoking the “if Obama did it” argument. Here’s the truth: Neither Obama nor any other American President would’ve done this. Like so much else today, it’s uniquely Trumpian and abhorrent.

There was outrage in some circles when President Obama saluted an American military officer while holding a coffee cup.

It stands to reason that those same critics should likely be outraged over President Trump appearing to salute a North Korean military general.

The respect/disrespect of Obama’s salute is irrelevant.

Salutes are given to officers of friendly militaries. The US and North Korea are technically still at war, which is a subject of the talks. One does not salute the enemy.

Others seemed to lean toward defending Trump’s move, saying he was put in an awkward situation.

Sigh. If you watch the video Trump reached his hand out to shake the generals but the general snapped to attention and saulted so he returned the salute. Not ideal but not what it seems…. https://t.co/qAZ2oLXGkO

Shortly after the historic summit between Trump and Kim on Tuesday, many news outlets — including Fox News, which has been very sympathetic to the president — criticized the outcome of the meeting in Singapore. Very few details were given in the immediate aftermath of the summit, and many reporters and pundits said very little was achieved, and that Trump made major concessions while receiving very few promises in return. Among the promises Trump made was that the U.S. and South Korea would stop conducting joint military exercises, a move that reportedly blindsided many officials from both countries.