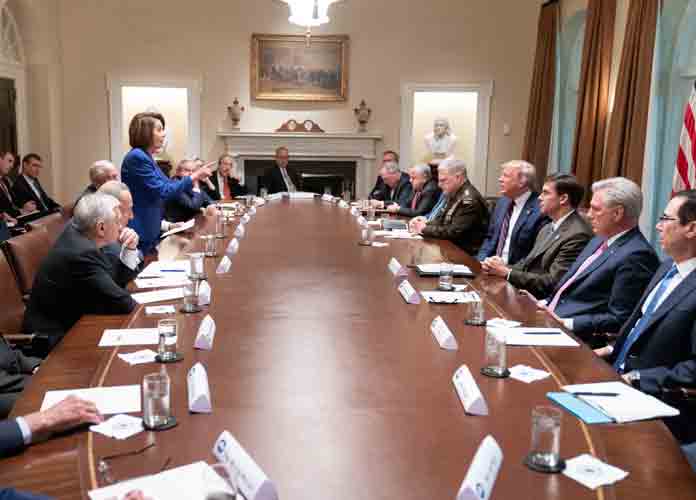 House Speaker Nancy Pelosi (D-California) told reporters at the White House on Wednesday that President Donald Trump had a total “meltdown” after the pair began discussing the situation in Syria.

“What we witnessed on the part of the president was a meltdown,” Pelosi said of Trump’s behavior during a meeting with Sen. Chuck Schumer (D-New York) and other Democratic congressional leaders about the crisis.

BREAKING: After walking out of a meeting with Trump on Syria, Democrats say the president called Speaker Pelosi a “third-rate politician.” Pelosi also said, “What we witnessed on the part of the president was a meltdown.”

Pelosi said Trump became especially angry after she accused him of once again bowing down to Russia’s government by letting Turkey invade Syria. The White House recently drew steep criticism from both liberals and conservatives for pulling out the few American troops that had been stationed in the area to fight ISIS alongside the Kurds. Pelosi noted that the Kremlin has been seeking “foothold in the Middle East” for years and pointed out to Trump that he had allowed Russian President Vladimir Putin this opportunity with his administration’s latest military decision.

“All roads with you lead to Putin,” Pelosi told Trump during the meeting. This comment reportedly set Trump off the edge. The president called Pelosi a “third-grade politician” and accused her of having an “unhinged meltdown” in a tweet that included a photo of the House Speaker standing up during the tense meeting about Syria. Pelosi quickly used the photo as the banner image for her profile on Twitter.

“Pray for her!” Trump wrote of Pelosi in a separate tweet, in which he also called her a “very sick person.”

Nancy Pelosi needs help fast! There is either something wrong with her “upstairs,” or she just plain doesn’t like our great Country. She had a total meltdown in the White House today. It was very sad to watch. Pray for her, she is a very sick person!

On Wednesday, the House passed a bipartisan resolution to condemn the withdrawal of U.S. troops from Syria with a 354-60 vote. In total, 129 Republicans backed the resolution.