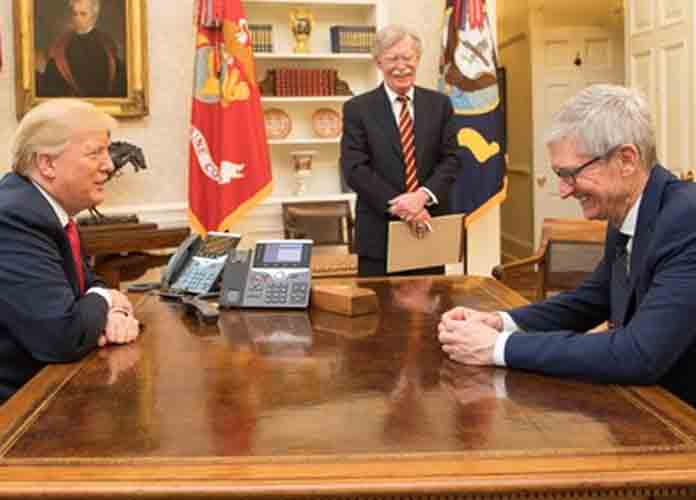 President Donald J. Trump and CEO of Apple Tim Cook in the Oval Office at the White House. April 25, 2018. In the background: John Bolton.

Cook tweeted in December 2013 that the Mac Pro was being manufactured in Austin.

We have begun manufacturing the Mac Pro in Austin. It’s the most powerful Mac ever. Orders start tomorrow. pic.twitter.com/Jrd1Gic3Ya

Trump said, “We’re seeing the beginning of a very powerful and important plant. Anybody that followed my campaign, I would always talk about Apple, that I want to see Apple building plants in the United States. And that’s what’s happening.”

Cook didn’t point out Trump’s gaffe. Cook requested Trump to make many of its Chinese-made products exempt from tariffs, but Trump was noncommittal. In public, though, Trump said that Cook wouldn’t “have to worry about tariffs.”

President Trump just toured a Texas plant that has been making Apple computers since 2013 and took credit for it, suggesting the plant opened today. "Today is a very special day."

Tim Cook spoke immediately after him and did not correct the record.

Apple said that it would build a billion-dollar campus in Austin. This campus would house its 5000 white-collar employees from 2022 onwards.

Trump tweeted the incorrect information that he had opened an Apple manufacturing plant in Austin. He also said that House Speaker Nancy Pelosi was indifferent to the plight of the American worker.

Today I opened a major Apple Manufacturing plant in Texas that will bring high paying jobs back to America. Today Nancy Pelosi closed Congress because she doesn’t care about American Workers!