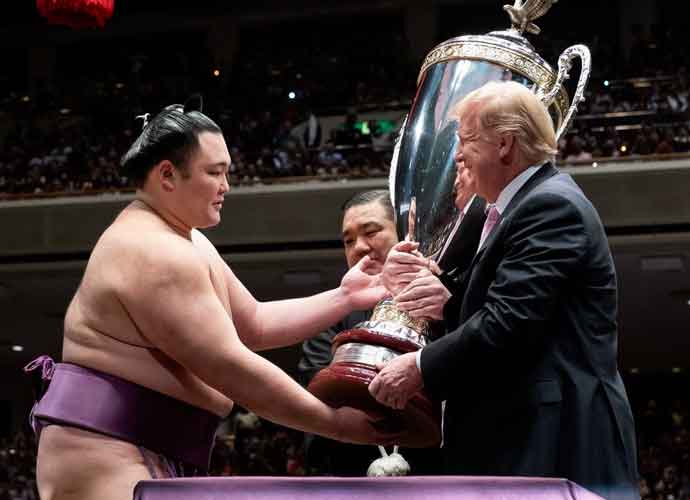 President Donald Trump was treated to sumo wrestling and golf in Japan over the weekend.

Japanese Prime Minister Shinzo Abe tried to get on Trump’s good side over the weekend with a day of festivities that included many of his favorite activities.

Abe took the president to play golf with a top Japanese professional golfer and then ate cheeseburgers for lunch. Abe tweeted a photo of the two leaders from the golf course and told reporters they had a “cozy” exchange of ideas. Next, Trump took in the ancient Japanese sport of sumo wrestling. Abe and his wife, Akie Abe, took Donald Trump and Melania Trump, to a match, and the president went in the ring to present a special U.S Presidents cup to the tournament winner.

Tonight in Tokyo, Japan at the Ryōgoku Kokugikan Stadium, it was my great honor to present the first-ever U.S. President’s Cup to Sumo Grand Champion Asanoyama. Congratulations! A great time had by all, thank you @AbeShinzo!! pic.twitter.com/nwwxJl6KXH

Monday will conclude the Trumps four-day Japan trip to strengthen relations between the two allies. Abe has incentive to butter up to the U.S president as trade tensions between the two nations rise, and Trump has threatened auto tariffs citing national security reasons.

Trump did not take a break from going after political rivals while in Japan. The president was seemingly not worried by a recent North Korean missile test, which showed capabilities of reaching Japan. He tweeted, “North Korea fired off some small weapons, which disturbed some of my people, and others, but not me.”

The president also took a dig at the former vice president, tweeting, “I smiled when he [Kim Jong-Un] called Swampman Joe Biden a low IQ individual, & worse. Perhaps that’s sending me a signal?”

The president will conclude his trip on Monday as the first foreign leader to meet Japan’s newly installed Emperor Naruhito.