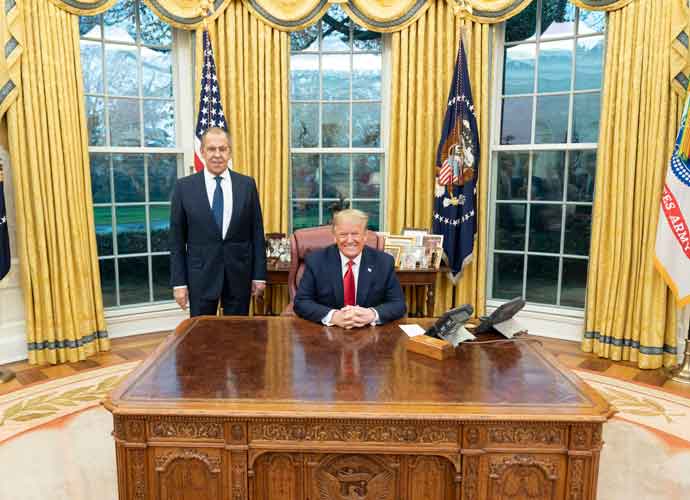 Trump Claims He Brought Up Election Interference In White House Meeting With Foreign Minister Sergei Lavrov, But Russian Deny It

Trump Claims He Brought Up Election Interference In White House Meeting With Russian Foreign Minister Sergei Lavrov, But He Denies It

The meeting was an “important moment,” but does not indicate any change in relations between the two countries, according to Kremlin spokesman Dmitry Peskoy.

“Of course this is an important moment. The very fact that the Russian minister was received by the U.S. President is an important point, of course,” Peskov told CNN Wednesday. “It’s another matter that thus far we can’t talk about any positive shifts in our bilateral relations, but such contacts are important.”

At a news conference at the Russian embassy, Lavrov seemed to not care that the meeting was on the same day the articles of impeachment were announced.

“Honestly, I was not interested in that,” he said.

Lavrov denied a White House claim that Trump warned him about interfering in the 2020 election.

The meeting centered on trade and denuclearization of other countries. They discussed an arms control deal that would affect China, North Korea’s denuclearization and Iran’s nuclear program.

Trump tweeted Tuesday that the meeting was “very good.”

“Discussed many items including Trade, Iran, North Korea, INF Treaty, Nuclear Arms Control, and Election Meddling,” he wrote. “Look forward to continuing our dialogue in the near future!”

Just had a very good meeting with Foreign Minister Sergey Lavrov and representatives of Russia. Discussed many items including Trade, Iran, North Korea, INF Treaty, Nuclear Arms Control, and Election Meddling. Look forward to continuing our dialogue in the near future! pic.twitter.com/tHecH9a9ck

Although Lavrov did not confirm or comment on their conversation about election meddling, he told a reporter that Russia saw no evidence of any interference. When suggested he could “read the Mueller report,” he replied that the report found “no proof of any collusion.”

According to a transcript released by Russia’s Foreign Ministry, he said the Kremlin was “ready to publicize the correspondence between us and the American administration regarding allegations of interference.”

Without elaborating on what documents he was talking about or how they were obtained, Lavrov said in the transcript, “We will be ready, as soon as Washington confirms its consent, to publicize these documents that are important to the public.”