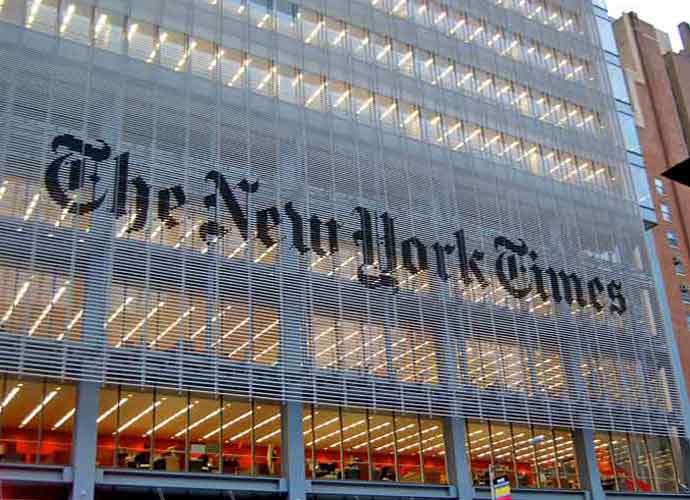 Trump Accuses ‘New York Times’ Of An ‘Act Of Treason’ For Reporting On U.S. Cyber Attacks On Russia

On Saturday, President Donald Trump continued his attacks on the free press, slamming the “failing” New York Times for its report that the United States was increasing its cyber attacks on Russia’s power grid.

In a series of tweets, the president claimed that the Times had committed a “virtual act of Treason,” by releasing this supposedly sensitive information, and then went on to undercut the information itself by writing that the Times‘ story was “NOT TRUE!” “Anything goes with our Corrupt News Media today,” he said in a later tweet. “They will do, or say, whatever it takes, with not even the slightest thought of consequence! These are true cowards and without doubt, THE ENEMY OF THE PEOPLE!”

Do you believe that the Failing New York Times just did a story stating that the United States is substantially increasing Cyber Attacks on Russia. This is a virtual act of Treason by a once great paper so desperate for a story, any story, even if bad for our Country…..

…..ALSO, NOT TRUE! Anything goes with our Corrupt News Media today. They will do, or say, whatever it takes, with not even the slightest thought of consequence! These are true cowards and without doubt, THE ENEMY OF THE PEOPLE!

The Times responded on Twitter that “Accusing the press of treason is dangerous,” and noted that they had “described the article to the government before publication.” According to their tweet, the National Security Council had not found any reason to be concerned over the content that the newspaper was set to publish.

Accusing the press of treason is dangerous.
We described the article to the government before publication. As our story notes, President Trump’s own national security officials said there were no concerns. https://t.co/MU020hxwdc pic.twitter.com/4CIfcqKoEl

The Times‘ story detailed an increase in U.S. cyber attacks on the Russian electrical grid, citing government officials who said that America was trying to warn Moscow not to attempt any more cyber-meddling in U.S. affairs. After former Special Counsel Robert Mueller confirmed that the Russians did have a hand in the 2016 presidential election, the United States government has been attempting to prevent similar hacking in the upcoming 2020 elections. The U.S. Cyber Command was granted additional operating authority last year by the White House and Congress, allowing it to work at rates higher than ever before. As some senior intelligence officials believe that Moscow may have installed malware that could damage U.S. power plants, oil and gas pipelines, and water supplies, the United States is attempting to create a deterrent to the use of such programs by installing their own weapons in important Russian systems.