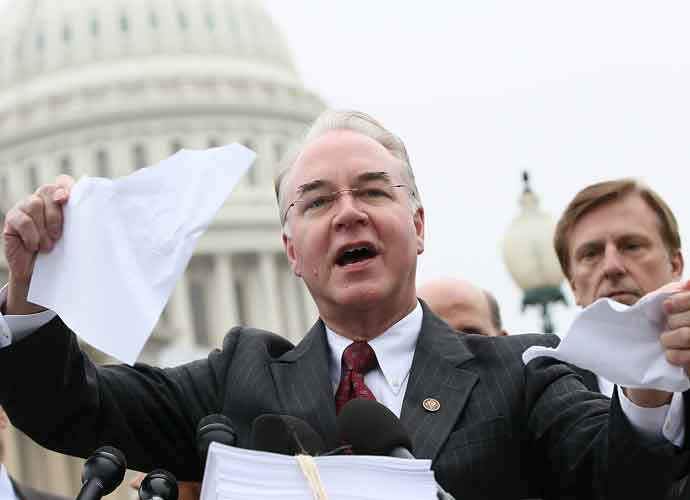 ARLINGTON, VA - MARCH 20: U.S. Rep. Tom Price (R-GA) tears a page from the national health care bill during a press conference at the U.S. Capitol March 21, 2012 in Washington, DC. Republican members from the House of Representatives gatherered to speak out against the health care bill which is the topic of a case before the Supreme Court next week. (Photo by Win McNamee/Getty Images)

Secretary of Health and Human Services Tom Price has spent more than $500,000 of taxpayer money on military aircraft use for multi-national trips. Price has resigned from his post following blowback from his actions.

Price and his wife have flown to Geneva, Berlin, Beijing, Tokyo, and other cities for various events on the government’s dime. HHS spokesperson Charmaine Yoest claims that Price has reimbursed the agency, but declined to say when he did so. Price has been under intense  criticism for his use of charter aircraft over domestic flights, which government secretaries usually take.

The White House evaluates the need for military aircraft overseas on a case-by-case basis, and Price had been approved. “Use of military aircraft for Cabinet and other essential travelers is sometimes an appropriate and necessary use of resources,” White House principal deputy press secretary Raj Shah told Politico. But Price’s recent predecessor Kathleen Sebelius, who served under President Barack Obama, says she never took a military plane oversea, but flew commercially. Sylvia Mathews Burwell, who served under Obama for his final 2.5 years, used a military plane to travel to Havana, Cuba.

In Price’s case, he brought along his wife Betty Price. “It’s our understanding that previous secretaries have never reimbursed for spousal travel,” says Yoest. Price plans to reimburse the government for the cost of his own seat on domestic trips, around $52,000, but that would not include the costs of military flights.

A White House official has confirmed that president Donald Trump‘s staff approved of the flights. “In both instances, those were Milair flights that were pre-approved,” said Yoest, with Milair being the nickname of military air flights. “We don’t have a deputy secretary that’s been confirmed… Milair is important for maintaining security and having secure communications, as well.”

Trump has been critical of Price’s Milair use, however, saying, “we’ll see” when asked if Price might be fired over the incident. “This @WhiteHouse has cut down on use of military aircraft for travel,” Shah tweeted, linking to an article that says that at this point in their terms, Obama had authorized more military flights than Trump – Obama with 94 and Trump with 77.

Price has been determined to limit federal spending in his six terms as a Republican House member from Georgia. He defended a proposed HHS budget that included a $663,000 cut from the agency’s annual $4.9 million spending on travel; however, he ask has a travel tab exceeding $1 million since May.

For example, Price, his wife, and eight HHS personnel flew from Berlin to Geneva – a 95-minute trip that cost taxpayers nearly $16,000. After that, Price flew through Africa and Europe, and the about 30 hours of flight time then cost $311,418.25, according to an invoice. Commercial flights for both would have saved thousands of dollars.

Treasury Secretary Steven Mnuchin recently was under fire for the same issue, except he reportedly used military flights to bring his wife on their honeymoon. He is also in the process of repaying the debts.