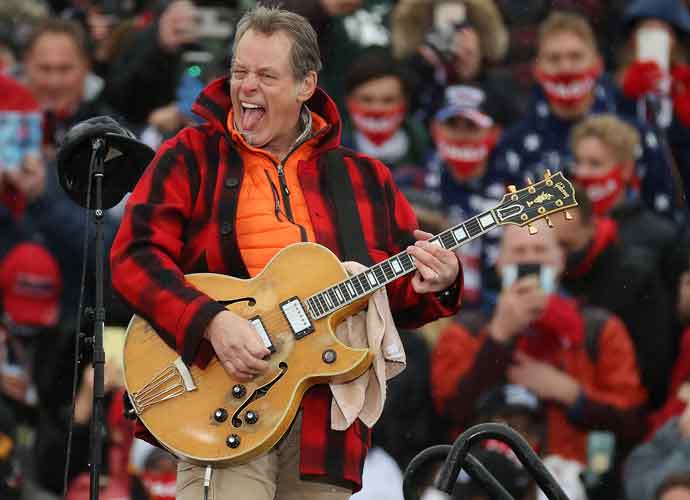 LANSING, MICHIGAN - OCTOBER 27: Entertainer and Michigan native Ted Nugent -- also known as the Motor City Madman -- performs the Star Spangled Banner during a campaign rally for U.S. President Donald Trump at Capital Region International Airport October 27, 2020 in Lansing, Michigan. With one week until Election Day, Trump is campaigning in Michigan, a state he won in 2016 by less than 11,000 votes, the narrowest margin of victory in the state's presidential election history. (Photo by Chip Somodevilla/Getty Images)

Nugent said that high school senior David Hogg is “brainwashed” and that he and his friends “wouldn’t know an AR-15 from a pterodactyl.”

Since the shooting at Marjory Stoneman Douglas High School in Parkland, Florida, Nugent has written Tweets against the gun reform movement.

“Who could possibly be so naïve to think that evildoers would have changed their minds had there been no ARs,” he wrote in two Tweets on Feb. 21, just a week after the shooting.

Nugent also wrote that people must focus on “glaring warning signs” to save innocent lives, not “ubiquitous hardware.” Later, he said that new gun laws would be counterproductive, though he did not explain how.

Nugent condemned the movement on March 24, the date of the March For Our Lives.

Hogg and his classmates have not responded to Nugent’s criticisms. Last week, after Fox News host Laura Ingraham tweeted about Hogg’s college rejections, he and his followers led several of her advertisers to drop her, including TripAdvisor and Rachel Ray Nutrish. Ingraham apologized after losing the sponsorships.