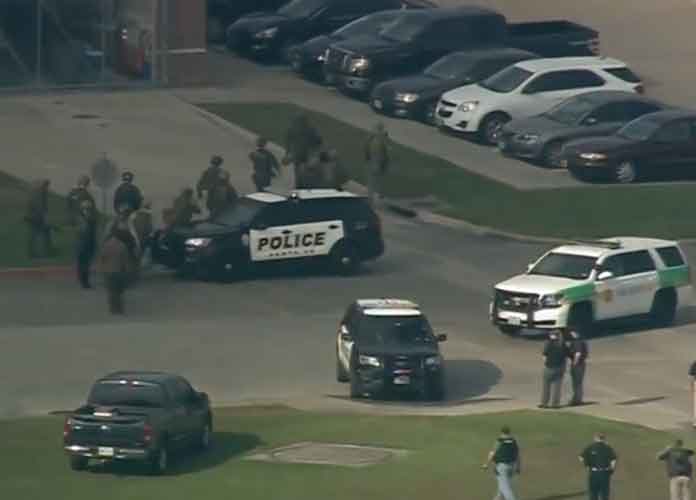 A gunman opened fire at a high school in Santa Fe, Texas, on Friday morning, killing at least eight people — possibly up to ten — and injuring several others, local authorities said.

A suspect is in custody after the massacre at Santa Fe High School, which is located in the greater Houston area. The suspect was identified as 17-year-old Dimitrios Pagourtzis, and another person of interest was held for questioning, according to The New York Times.  The Harris County sheriff said at least one policeman was injured. All those who were hurt are reportedly being treated at local hospitals. Texas Governor Greg Abbott said Pagourtzis had a .38 revolver and a shotgun, both of those firearms owned by his father.

The shooting began at around 7:45 am local time, when the school day was just starting. One student said the school’s fire alarms began ringing at around that time. President Donald Trump and Vice President Mike Pence both responded to the shooting in separate statements. “Early reports not looking good,” Trump wrote. “God bless all!”

We grieve for the terrible loss of life, and send our support and love to everyone affected by this horrible attack in Texas. To the students, families, teachers and personnel at Santa Fe High School – we are with you in this tragic hour, and we will be with you forever… pic.twitter.com/LtJ0D29Hsv

“Allow me to address the shooting that took place this morning at Santa Fe High School in Texas,” Pence said in a video address. “The president and I have been briefed. We will continue to monitor the situation. And we will make all federal resources available to first responders and school officials in the wake of this incident. But we say to the students, families, the teachers of Santa Fe High School and all of those affected in the entire community, we are with you. You are in our prayers and I know you are in the prayers of the American people.”

At around midday on Friday, local law enforcement announced they were searching the school for potential explosive devices. They did not say how many explosives were found or believed to have been found.

#UPDATE There have been explosive devices found in the high school and surrounding areas adjacent to the high school. Because of the threat of explosive items, community members should be on the look-out for suspicious packages and anything that looks out of place.

The shooting is the latest in dozens of school massacres that have occurred across the U.S. After a 19-year-old former student of Marjory Stoneman Douglas High School in Parkland, Florida, killed 17 people at the school on Feb. 14, the national debate on gun control was revived. Students from MSD High School and other schools around the country have since organized multiple marches and rallies, including the March for Our Lives that took place in Washington, D.C. and New York City in March.

The protests were intended to push for more gun reform and to call out the NRA, as well as other gun rights-organizations and the many politicians who have received millions of dollars in donations from these types of groups.

Since then, many retail stores like Dick’s Sporting Goods have stopped selling assault rifles and gun accessories like bump stocks and high-capacity magazines, and have also raised the minimum age to purchase weapons from 18 to 21. States like Virginia have also begun pushing for new gun laws.

However, Trump has refused to support gun reform laws — as have several lawmakers — after meeting with NRA officials earlier this year in the wake of the Parkland shooting. The president had initially voiced support for introducing more thorough background checks and raising the minimum wage, as well as for stripping dangerous individuals of their guns without granting them due process first, but walked back from these promises after meeting with the gun lobby.

Trump and Pence both recently spoke at an NRA event.

Correction: This post was updated from an earlier version that said eight people were killed.

What Does The Future Hold For Aaron Rodgers? It’s A ‘Beautiful Mystery’

Is Tom Brady’s Playing Career Over?

Patrick Mahomes: NFL OT Rule ‘Kind Of Stinks’ – Even Though It Helped Him