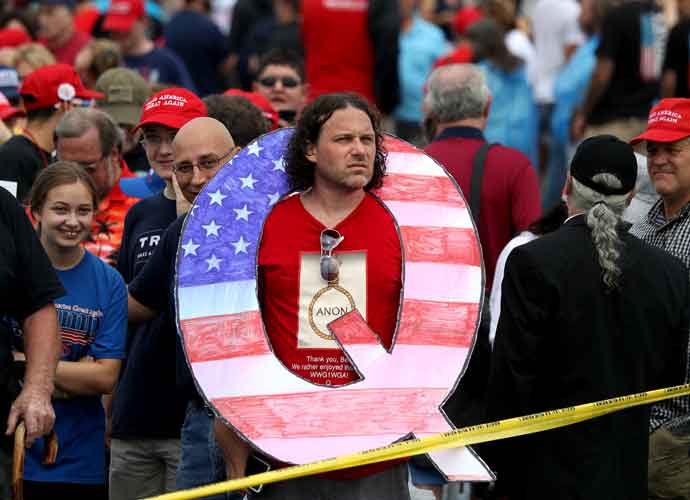 QAnon Supporters In Dallas Wait For JFK Jr. To Rise From The Dead

Election night in Dallas, Texas on November 2, a large group of QAnon supporters gathered for what they thought would be the return of John F. Kennedy Jr., who famously died in a plane crash in 1999. On the street in downtown Dallas, where President John F. Kennedy was assassinated in 1963, is where they falsely believed former President Donald Trump would be reinstated as the president of the United States, according to many QAnon conspiracy theory accounts across various social media.

JFK, Jr.: #QANON believes the dead Democrat and son of a very famous, pro-#Equality war hero Democrat President is their messiah and will run as Trump's VP. In 1999, JFK, Jr. and his wife died in a plane crash. QANON says guy at top left in hat is him now. pic.twitter.com/jldtGGZ6et

QAnon’s popularity increased when Joe Biden was elected president in November 2020, with the conspiracists claiming that the election was illegitimate. They also believe that every U.S. president and law since 1871 is illegitimate.

This “1871” theory relates to the passage of the District of Columbia Organic Act of 1871, which QAnon conspiracists believe made the United States a corporation, rather than a country. According to the conspiracy theory, they believe this would make Trump the rightful president.

Many supporters also believe the gathering on November 2 was filled with celebrities who have passed away such as Kobe Bryant and Robin Williams.

There's a sizable crowd of QAnon believers in Dallas's Dealey Plaza, where they're convinced JFK Jr. and plenty of other dead celebrities will return. Lots of talk online about Kobe Bryant and Robin Williams. pic.twitter.com/HG8MgdHLFc

Not all QAnon supporters are on the “JFK Jr wing” of the movement, some think they’re just as nutty as the rest of the world. While the Kennedy family conspiracy theories continue to become more and more elaborate, these supporters are becoming increasingly frustrated at their colleagues lack of belief in their theories. In a message shared among QAnon supporters, it was written, “Time for us crazy people to be vindicated. God is good, love Trump and The Kennedy’s.”

The fact that JFK Jr. did not rise from the dead on Tuesday still did not dissuade the faithful.

The JFK Jr wing of QAnon has become convinced that the Kennedy family is going to make some sort of grand reappearance in Dallas tomorrow and announce that Trump is President again. pic.twitter.com/BZhxTbvApj

Trump Unleashes A Slew Of QAnon Posts On Truth Social