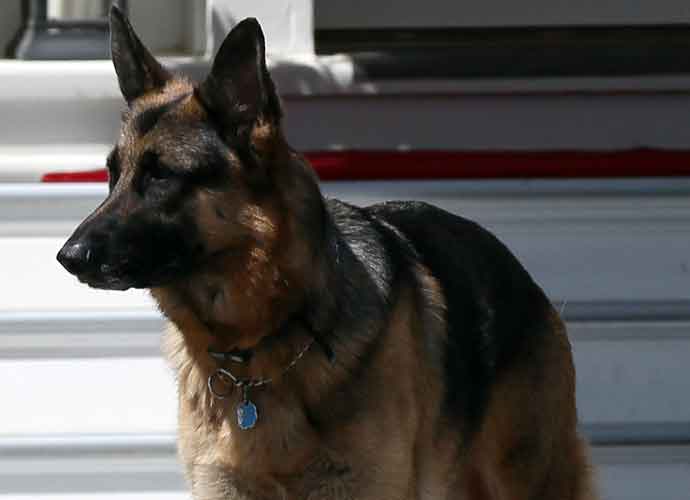 WASHINGTON, DC - MAY 10: Vice President Joe Biden's dog, Champ, stands during speechs during a Joining Forces service event at the Vice President's residence at the Naval Observatory May 10, 2012 in Washington, DC. U.S. first lady Michelle Obama and Biden joined with Congressional spouses to assemble Mother's Day packages that deployed troops have requested to be sent to their mothers and wives at home. (Photo by Win McNamee/Getty Images)

Newsmax host Greg Kelly mocked President Joe Biden‘s dog Champ on Friday during a segment of his show for his appearance.

“Did you see the dog?” Kelly asked, referring to Champ. “Doesn’t he look a little, uh, a little rough? I love dogs, but this dog needs a bath and a comb and all kinds of love and care. I’ve never seen a dog in the White House like this.”

Champ, a 12-year-old German shepherd, has been in the Biden family since 2008. The average lifespan of a German Shepherd is between 9 and 13 years.

Two guests were on Kelly’s show that night. One of the guests, Craig Shirley, said Champ looked “very dirty and disheveled and very unlike a presidential dog like Millie or Victory or any other dog that I’ve seen in the White House.”

People are barking back at Greg Kelly for a few jokes about President Biden's dog: https://t.co/BDaYO14lum

Brian Williams, host of MSNBC”s The 11th Hour, took aim at Newsmax and Kelly for the segment.

“Think of it this way: If Champ were to meet Greg Kelly, he would probably love Greg Kelly unconditionally,” Williams said. “That’s what dogs do. Probably also why there are no dogs anchoring Newsmax.”

Tonight's #LastThingBeforeWeGo? Why did Newsmax's Greg Kelly decide to go after the Bidens' dog?