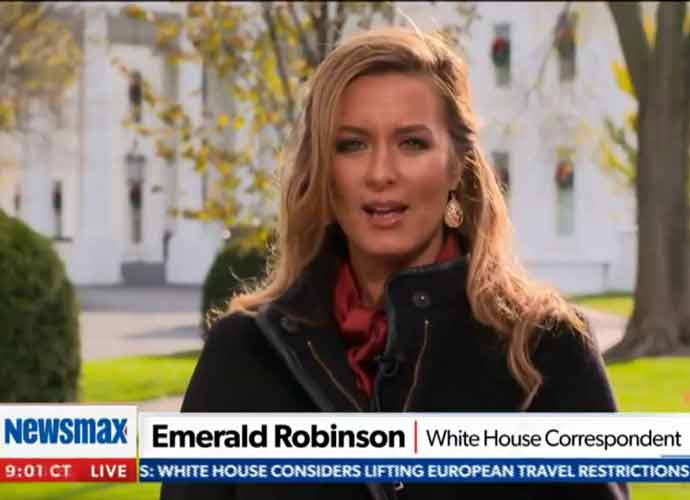 Emerald Robinson, a White House correspondent at the conservative media outlet Newsmax, was banned from Twitter by the site’s moderators on Tuesday for continuing to post disinformation about COVID-19.

Users “may not use Twitter’s services to share false or misleading information about Covid-19 which may lead to harm,” the platform states in its rules and policies.

“Dear Christians: the vaccines contain a bioluminescent marker called LUCIFERASE so that you can be tracked,” Robinson tweeted last Monday. “Read the last book of the New Testament to see how this ends.”

Luciferase “is not an ingredient in any of the coronavirus vaccines currently on the market,” noted The Daily Beast. “Furthermore, luciferase does not have any satanic associations despite deriving its name from the Latin word lucifer, which means light-bearing.”

Newsmax quickly attempted to distance itself from Robinson’s false remarks, which resulted in a week-long suspension due to it being her fourth infraction.

“Newsmax strongly believes and has reported that the COVID-19 vaccines are safe and effective. We do not believe the vaccines contain any toxic materials or tracking markers, and such false claims have never been reported on Newsmax,” the network said in a statement. “The many medical experts appearing on Newsmax have supported the use of the vaccine.”

But less than a day after her posting privileges were reinstated, Robinson shared additional misinformation about coronavirus vaccines, including that they contained luciferase.

Robinson “was permanently suspended for repeated violations of our Covid-19 misinformation policy,” a Twitter spokesperson told The Daily Beast.

Announcing that she's back from her Twitter suspension, Emerald Robinson appears to throw shade at her employer Newsmax, who has benched her over her Satanic vaccine.

She then promotes he new Substack.

Following her fifth and final expulsion from Twitter, Robinson encouraged her followers to migrate to Substack, where she continued to aggressively push baseless conspiracy theories about COVID-19 vaccines.

“Let me repeat: Luciferase is INCLUDED in the mRNA sequence of the Moderna patent! So I’m right — and the corporate media is wrong. Does this surprise anybody?” she wrote. “One more thing: the new COVID-19 antibody test is called SATiN and it uses Luciferase. No, I’m not kidding. It’s not an accident that they’ve given this name to this test. It’s a warning.”

Robinson has not returned to the air on Newsmax since her suspension.