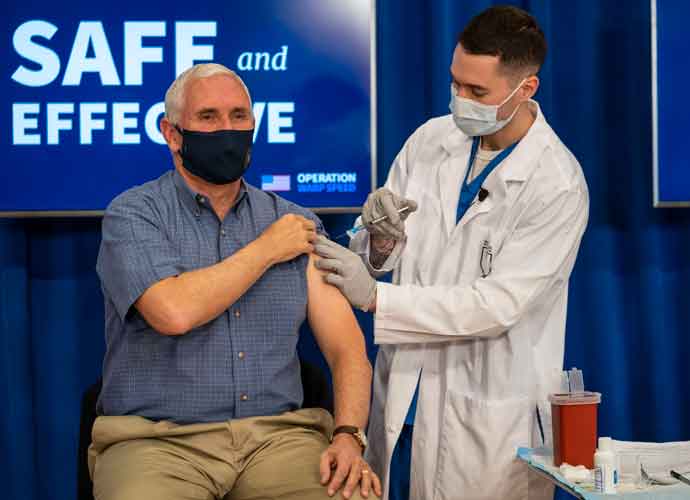 WASHINGTON, DC - DECEMBER 18: U.S. Vice President Mike Pence receives a COVID-19 vaccine to promote the safety and efficacy of the vaccine at the White House on December, 18, 2020 in Washington, DC.

Vice President Mike Pence received the COVID vaccine Friday morning, which was televised in a ceremony in the Eisenhower Executive Office. He is the highest-ranked government official to receive the newly authorized Pfizer vaccination so far.

In addition to the Vice President, Second Lady Karen Pence and Surgeon General Jerome Adams also received the vaccine, and staff from Walter Reed National Military Medical Center attended to them after the vaccine’s administration.

“We gather here today at the end of a historic week to affirm to the American people that hope is on the way,” said Pence. “Karen and I were more than happy to step forward before this week was out to take this safe and effective coronavirus vaccine that we have secured and produced for the American people. It’s truly an inspiring day.”

Pence has served as the chair of the White House coronavirus task force and is one of the few top officials in the Trump administration who did not contract COVID during the past several months, despite many other members testing positive in an outbreak.

Pence added that he and Mrs. Pence “wanted to step forward and take this vaccine to assure the American people that while we cut red tape, we cut no corners.” It is notable that at this time, President Donald Trump nor First Lady Melania Trump have received the vaccine, and neither has President-Elect Joe Biden. Both Trump and Biden have said that they will take the vaccine, but have not clarified exact timing.

Trump has said he is “looking forward to taking the vaccine at the appropriate time” on Twitter, and Biden’s team has said his vaccination might come as early as next week, but it is not definite.

The Food and Drug Administration authorized the Pfizer vaccine for emergencies last week, and another COVID vaccine, made by Moderna, was approved by an FDA advisory committee last week, but still needs FDA approval. The vaccines would be significant in the fight against coronavirus in the United States, as the death toll passed 300,000 on Monday.