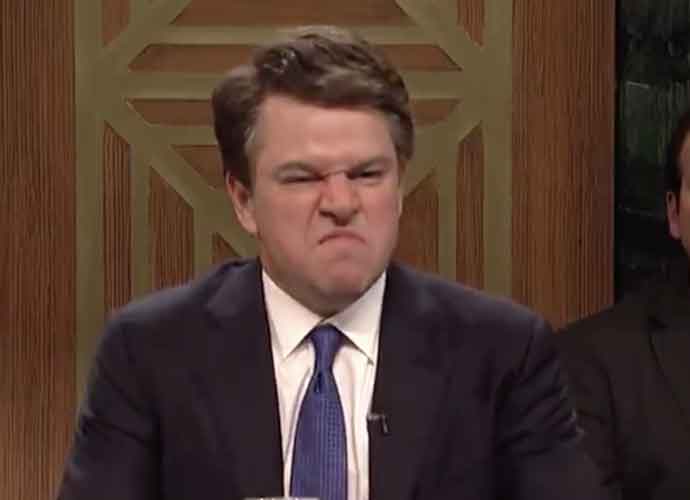 NBC’s Saturday Night Live has experienced a massive in the resurgence the two and a half years since the 2016 presidential campaign. Last night, the show used its 44 season premiere to mock Supreme Court nominee Brett Kavanaugh’s Senate testimony.

Guest star Matt Damon depicted an enraged and combative version of Kavanaugh, yelling, scowling and guzzling huge glasses of water while cast members on the Senate Judiciary Committee questioned him.

Damon’s Kavanaugh began his opening statements by proclaiming, “I’m going to start at an 11. I’m going to take it to about a 15 real quick.”

He maintained that tone for the rest of the show’s 13-minute cold open, at times angrily shouting that he “loves beer,” at others emotionally referencing his high school calendars.

“Every night I was lifting weights with PJ and Squee and Handsy Hank and Gang Bang Greg. But you know the liberal media is going to find some way to spin,” Damon told his fellow cast member Cecily Strong playing Sen. Dianne Feinstein (D-Calif.).

Kavanaugh and his accuser Christine Blasey Ford appeared before the Senate Judiciary Committee last week to be questioned and give their testimonies. Kavanaugh stands accused of sexual assaulting Ford during a high school house party in the 1980s.

In the weeks since Ford came forward with her charges against Kavanaugh, two other women, Deborah Ramirez and Julie Swetnick, have made their own accusations against the judge. Kavanaugh has denied all the allegations against him. He claims that the charges made against him are part of a conspiracy against him spearheaded by the Democrats.

The Senate Judiciary Committee plans to move ahead with Kavanaugh’s confirmation, but has agreed to delay the vote for a week in order to allow the FBI to reopen its background check on Kavanaugh, and to investigate the allegations.