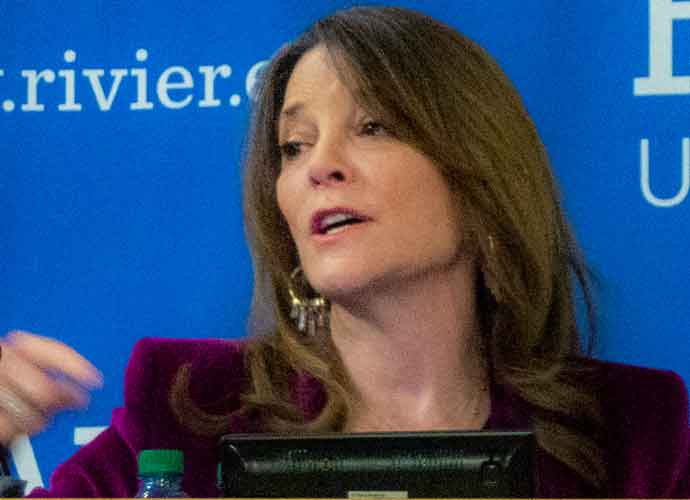 Taking the stage during Thursday’s debate, as well as the debate prior, was no shortage of candidates with one-in-a-million chances of winning: Bill Di Blasio, Tim Ryan, Eric Swalwell, just to name a few. But among those standing on the peripheries of the two first democratic debates, Marianne Williamson has stood apart from the rest.

The author and acclaimed “self-help guru,” who acts as a life-coach for Oprah, spoke for a combined five minutes during the debate, but her outlandish comments and appeal to defeat President Donald Trump by “harnessing love.”

When asked what her plan would be to lower the cost of prescription drugs, Williamson responded, “It’s really nice if we’ve got all these plans, but if you think we’re going to beat Donald Trump by just having all these plans, you’ve got another thing coming. He didn’t win by saying he had a plan. He won by simply saying ‘Make America Great Again.’ ”

Several late-night hosts have already begun poking fun at Williamson, portraying her as something of a lovable quack. “Yes, we need to go deeper than these superficial, carefully thought out political policies,” Stephen Colbert quipped. “Has anyone tried fixing America with crystals and bee pollen? Yoga?”

Twitter was engulfed in Williamson commentary, nearly all of it comedic. “Marianne Williamson is like a sentient glass of Chardonnay,” tweeted one. Another user lauded her; “Marianne Williamson has already reached legendary also-ran status. Reparations. Spiritual Energy. Inexplicable 1940s Mid-Atlantic Accent. An icon.”

Williamson’s communications director, Patricia Ewing, said that the candidate is quite alright with the jokes. In fact, she takes it as evidence that her message is fresh and unique, and is reaching voters. “What you saw to the left of her was a sea of blue suits. They all pretty much said the same thing with a little bit of difference.” Williamson’s clothing choice last night? Teal.