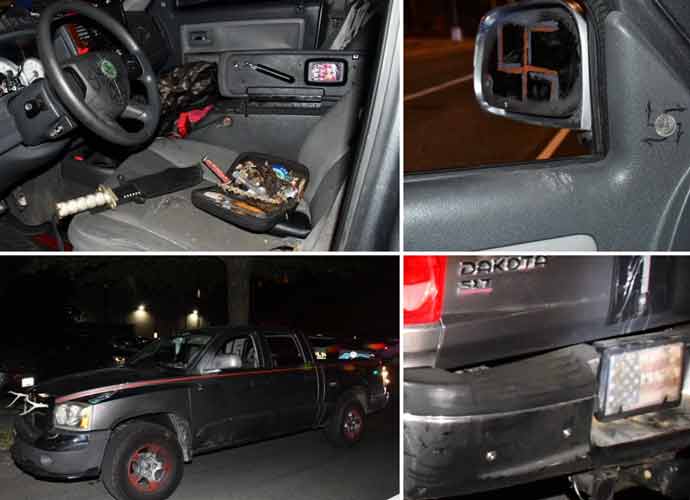 A 44-year-old man from California was arrested near the Democratic National Committee (DNC) building Monday morning after the U.S. Capitol Police (USCP) found illegal weapons in his car.

The officials confirmed that Donald Craighead, the arrested man, possessed bayonet and machete, the prohibited weapons in Washington, D.C., in his car.

“Around midnight, a Special Operation Division Officer was on patrol when he noticed a Dodge Dakota pickup truck, with a swastika and other white supremacist symbols painted on it, outside of the DNC headquarters,” the statement from the USCP reads. “The truck did not have a license plate. Instead, a picture of an American flag was placed where the license plate should have been.”

“The Capitol Police officer pulled over the truck along the 500 block of South Capitol Street, SW,” the statement added.

The Capitol Police also released photos of the car on Twitter.

The department further detailed how Craighead first claimed he was “on patrol” and started to talk about white supremacist beliefs.

“This is good police work plain and simple,” said Chief Tom Manger in the Monday statement. “We applaud the officers’ keen observation and the teamwork that resulted in this arrest.”

The Capitol Police has been boosting security and training ahead of the potential violent rally scheduled on September 18.

“We have a robust security posture planned for September 18,” the Capitol Police statement from earlier this month reads. “All available staff will be working.”

Since the January 6 riot, the Capitol Police have been working on improving the security around the Capitol area so as not to repeat the tragic events of January.