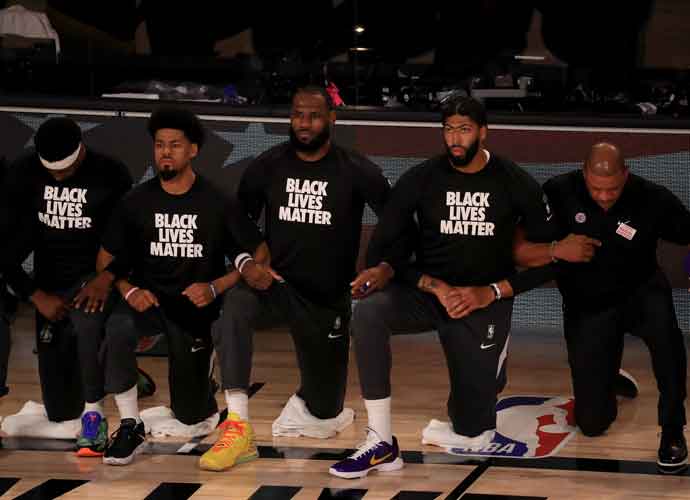 LAKE BUENA VISTA, FLORIDA - JULY 30: LeBron James #23 and Anthony Davis #3 of the Los Angeles Lakers in a Black Lives Matter Shirt kneel with their teammates during the national anthem prior to the game against the LA Clippers at The Arena at ESPN Wide World Of Sports Complex on July 30, 2020 in Lake Buena Vista, Florida. (Image: Getty)

NBA star LeBron James said Tuesday he endorses a police reform bill named after George Floyd, honoring him as a person who “literally changed the world.”

George Floyd Justice in Policing Act of 2020 was introduced by House Democrats last year in June after then Minneapolis police officer Derek Chauvin murdered George Floyd by pressing his knee on Floyd’s neck for nine minutes.

Tuesday was the first anniversary of George Floyd’s murder.

The bill passed the House in March with a 220-212 vote. No Republicans voted yes.

“It holds a lot of accountability. I think it will make our communities, and make this great nation, a better place. So I’m all for that,” said James.

George Floyd Justice in Policing Act would ban several policing practices like racial profiling, chokeholds and no-knock warrants at the federal level. The bill would also restrict shields on lawsuits against police departments.