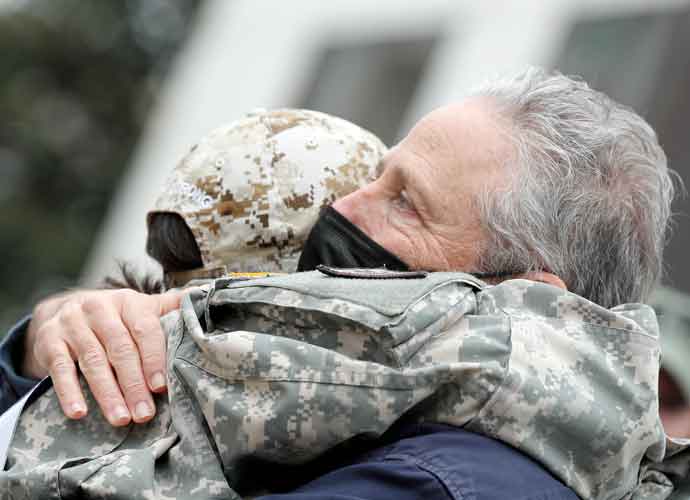 Jon Stewart Hugs Veterans Exposed To Burn Pits In Foreign Wars Full view WASHINGTON, DC - APRIL 13: Comedian/activist Jon Stewart (R) gives a veteran a hug during a news conference on the benefits for veterans exposed to burn pits at the VFW Building on April 13, 2021 in Washington, DC. The phrase "burn pit" refers to an area of a deployed military base devoted to open-air burning of waste often using jet fuel as an accelerant. (Photo by Paul Morigi/Getty Images)

Former Daily Show host Jon Stewart blasted Sen. Ted Cruz (R-Texas) and other Republicans for stalling bipartisan legislation that would have helped veterans who were exposed to burn pits in the Afghanistan and Iraq Wars.

“This is no trick,” he said in a video message posted to Twitter. “Everything in the government is either mandatory or discretionary spending, depending on which bucket they decide to put it in … [Cruz] is pretending that this is a new thing that the Democrats stuck into the bill and snuck past him.”

“The bill that Ted Cruz voted yes on had the exact same funding provisions as the bill he voted no on,” Stewart added during an appearance on NBC’s Meet the Press. “It’s the exact same bill. None of this makes any sense.”

In an interview, Cruz accused the Democrats of trying to pull a budgetary trick by mobilizing $400 billion. The bill eventually passed this week with broad bipartisan support.