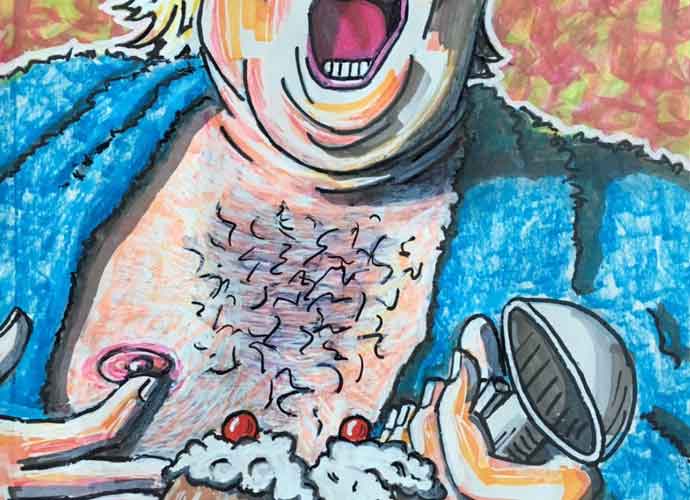 Actor Jim Carrey jokingly tweeted a submission to the Smithsonian National Portrait Gallery of a portrait of President Donald Trump.

“Dear Smithsonian National Portrait Gallery @NPG, I know it’s early but I’d like to submit this as the official portrait of our 45th President, Donald J. Trump,” Carrey tweeted along with a drawing of Trump screaming and eating ice cream while dressed in a robe. “It’s called, ‘You Scream. I Scream. Will We Ever Stop Screaming?’”

Dear Smithsonian National Portrait Gallery @NPG, I know it’s early but I’d like to submit this as the official portrait of our 45th President, Donald J. Trump. It’s called, ‘You Scream. I Scream. Will We Ever Stop Screaming?’ pic.twitter.com/LrCmlXXpv7

Jim, you are killin’ it. Thank you.

Keep them coming Jim. You on fire boy!

One user was even inspired to create their own art.

My wife and I found a great use for cigarette butts! Maybe we can show these at the same gallery 😆 pic.twitter.com/Yb846Q1SA3

This is the portrait of a so-called Christian whose only purpose in life is to lie for the wicked. Monstrous! pic.twitter.com/MeYLTy1pqb

Rubio‘s agenda is clear. Keep taking millions from the NRA and wash the blood of innocent children off his hands. Apparently $3.3 million is the price of this politician’s soul. pic.twitter.com/wom4IrTfsj

Today our nation’s youth are demanding their basic human right to go to school without dying in the name of greed. It’s time for Congress to act like adults worthy of their office. PASS TOUGHER GUN LAWS! BAN THE AR-15! STOP TAKING NRA BLOOD MONEY! ENOUGH IS ENOUGH! #neveragain pic.twitter.com/Hhg0Qltnjr

Cheers to you Stephen Hawking, the greatest mental athlete of our time. You are all that is! See you around, buddy! ;^) pic.twitter.com/LEqYnFn2rW