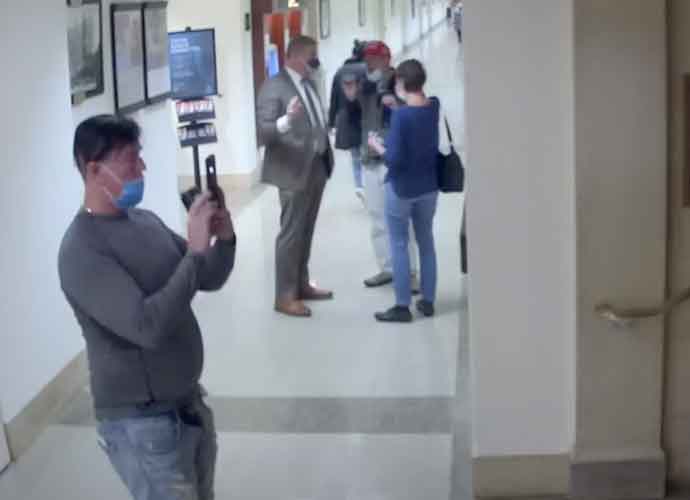 The video, which was released by the committee on Wednesday, shows one of the individuals on the tour taking photos in the basement, raising questions of if he was making note of the hallways and exits. The same man was seen at the riot the next day screaming threats to various Democratic lawmakers.

“There’s no escape Pelosi, Schumer, Nadler. We’re coming for you. We’re coming in like white on rice, for Pelosi, Nadler, Schumer, even you AOC. We’re coming to take you out, and pull you out by your hairs,” the unidentified man said in reference to Speaker of the House Nancy Pelosi (D-California), Senate Minority Leader Chuck Schumer (D-New York), longtime Rep. Jerry Nadler (D-New York) and Rep. Alexandria Ocasio-Cortez (D-New York).

Sources report that the committee has since interviewed the man.

Rep. Bennie Thompson (D-Mississippi), the committee chairman, wrote a letter to Loudermilk on Wednesday addressing the newly released footage noting that the Capitol complex had been closed to the public on January 5, 2021.

“Surveillance footage shows a tour of approximately ten individuals led by you to areas in the Rayburn, Longworth, and Cannon House Office Buildings, as well as the entrances to tunnels leading to the U.S. Capitol,” he said. “Individuals on the tour photographed and recorded areas of the complex not typically of interest to tourists, including hallways, staircases, and security checkpoints.”

The Capitol Police previously went through security footage from January 5 but had announced that there was nothing suspicious. Loudermilk responded to Thompson’s letter in a statement.

“As Capitol Police confirmed, nothing about this visit with constituents was suspicious,” the Congressman wrote. “The pictures show children holding bags from the House gift shop, which was open to visitors, and taking pictures of the Rayburn train. This false narrative that the Committee and Democrats continue to push, that Republicans, including myself, led reconnaissance tours is verifiably false. Nowhere that I went with the visitors in the House Office Buildings on January 5th were breached on January 6th; and, to my knowledge, no one in that group was criminally charged in relation to January 6th.”

"With the public hearings of the 1/6 select committee already well underway, new evidence keeps trickling out against the disgraced, deplatformed ex-president and his allies in the Republican Party. Today, Republican Congressman Barry Loudermilk… back in focus"-@NicolleDWallace pic.twitter.com/vez1WhLC2s

Trump Refused To Say ‘Election Was Over’ In Jan. 7 Speech, Video Shows