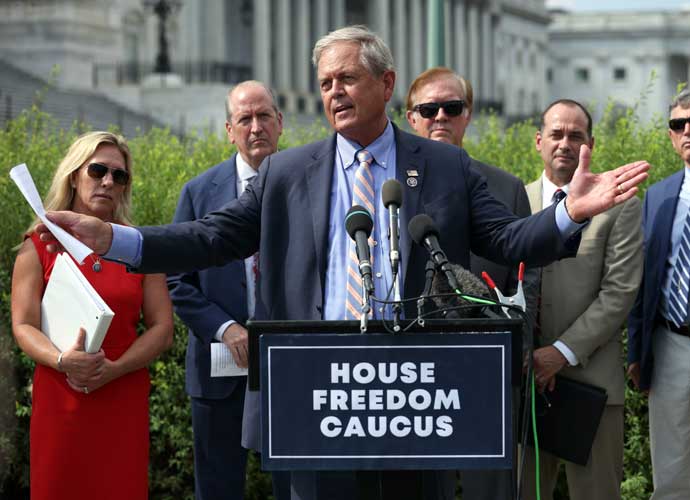 WASHINGTON, DC - AUGUST 23: U.S. Rep. Ralph Norman (R-SC) speaks at a news conference on the infrastructure bill with fellow members of the House Freedom Caucus, outside the Capitol Building on August 23, 2021 in Washington, DC. The group criticized the bill for being too expensive and for supporting special interests. (Photo by Kevin Dietsch/Getty Images)

The messages were obtained by the January 6 House committee investigating the Capitol attack and released by the left-leaning media outlet Talking Points Memo.

“Mark, in seeing what’s happening so quickly, and reading about the Dominion law suits [sic] attempting to stop any meaningful investigation we are at a point of no return in saving our Republic!!” one of the messages directed to then-Trump Chief of Staff Mark Meadows read. “Our LAST HOPE is invoking Marshall [sic] Law!! PLEASE URGE TO PRESIDENT TO DO SO!!”

Martial law is when power is transferred to the military and is usually invoked in a time of rebellion or natural disaster.

The Dominion lawsuits Norman referred to in his messages had to do with accusations members of the GOP were making against Dominion Voting Systems. They claimed without evidence that they were rigged in favor of the Democrats.

Norman’s office responded to the publicized messages in a statement, saying it came from a place of “frustration.”

“Obviously, martial law was never warranted,” Austin Livingston, who serves as Norman’s communication director, said in a statement to WCNC, Charlotte’s NBC affiliate. “That text message came from a source of frustration, on the heels of countless unanswered questions about the integrity of the 2020 election, without any way to slow down and examine those issues prior to the inauguration of the newly elected president.”