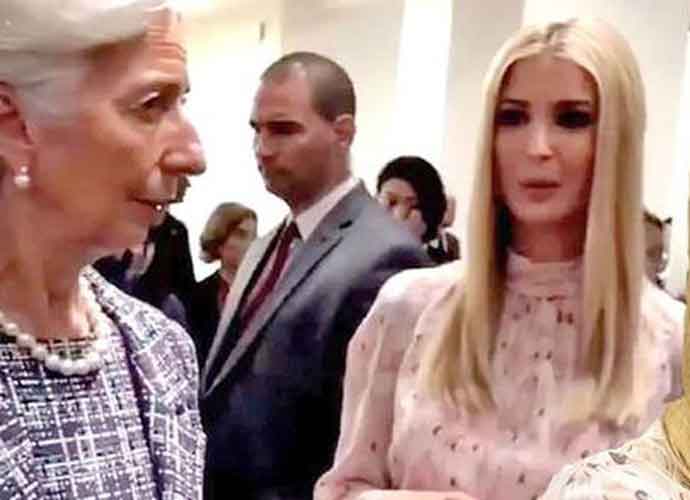 Donald Trump was criticized for his nepotistic practices after giving his daughter, Ivanka Trump, a pivotal role in last week’s G20 leader summit.

On Saturday, the French government released a video showing Ivanka awkwardly interjecting during a conversation between French President Emmanuel Macron, British Prime Minister Theresa May, Canadian Prime Minister Justin Trudeau, and International Monetary Fund director Christine Lagarde. The video quickly went viral for the hesitant manner in which Ivanka spoke, as well as the icy glower that she received from Lagarde.

Not only did Trump include his daughter in important global meetings, but he also let her become one of the first Americans to ever step into North Korea on Sunday, as well as pulling her onstage in South Korea with the comment “she’s going to steal the show.”

All of this has made foreign policy experts nervous because Ivanka has no previous diplomatic experience or training, as shown in the G20 video. Ned Price, a foreign policy aide to Barack Obama, said that Trump’s decision to have Ivanka as the face of the U.S. “reflects poorly on the United States that we’re too often represented by unelected officials without any relevant qualifications.”

“It’s one thing for Trump to have his relatives around him in the White House as personal consigliere, especially if they do have the calming influence that’s been reported,” said Price. “But it’s quite another for his daughter to represent the United States of America in the presence of world leaders.”

Many political figures also worry that Trump is attempting to set up a dynastic system that will leave his family in power for decades to come. He has given top positions to family members such as his son-in-law Jared Kushner and his sons Donald Trump Jr. and Eric Trump, even though none of them have political experience. The president’s refusal to guarantee support for a hypothetical Pence 2024 bid has fed rumors that he wants Trump Jr. to run, potentially entrenching his family in government decades into the future.