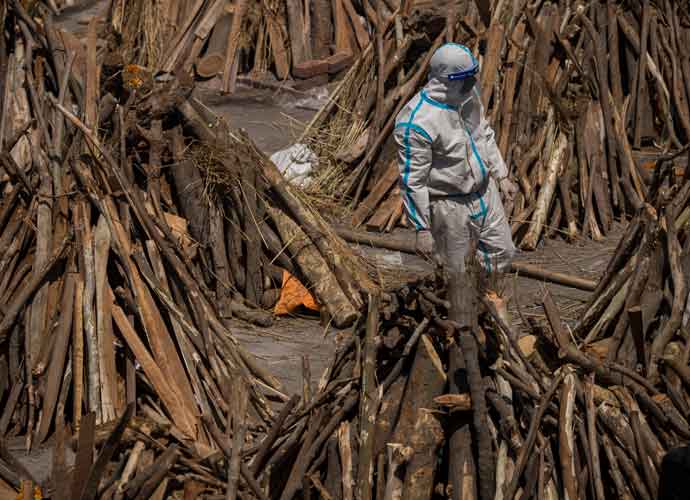 NEW DELHI, INDIA - APRIL 24: A man wearing PPE kit (Personal Protection Equipment) can be seen amid funeral pyres before they were lit to perform the last rites of the patients who died of the Coronavirus disease at a crematorium on April 24, 2021 in New Delhi, India. With recorded cases crossing 300,000 a day, India has more than 2 million active cases of Covid-19, the second-highest number in the world after the U.S. A new wave of the pandemic has totally overwhelmed the country's healthcare services and has caused crematoriums to operate day and night as the number of victims continues to spiral out of control. (Photo by Anindito Mukherjee/Getty Images)

Indian Hospital Runs Out Of Oxygen, Resulting In 24 Deaths

On Sunday evening, a hospital in the southern Indian state of Karnataka ran out of oxygen for critically ill COVID-19 patients, due to a pipe malfunction. Relatives of the COVID patients were forced to use towels to fan their loved ones, in an attempt to supply them with oxygen.

Some family members posted on social media; others called local politicians; and a few searched the hospital’s corridors for a doctor or nurse to help with the dire situation.

Unfortunately, the situation was too far gone to be remedied.

It still remains unclear exactly how many fatalities resulted from this tragic incident. Some reports say 10 died of oxygen deprivation, while others say over 14 more died of commodities associated with COVID.

M.R. Ravi, an official in Chamarajanagar, commented on the inconsistent reported: “The deaths happened between Sunday and Monday morning, but we can’t say all died due to lack of oxygen. We are investigating the cause.”

The demand for medical oxygen in India far outweighs the supply for the country, which is currently battling a brutal second wave of COVID infections.

Nonetheless, official have denied that there is an oxygen supply issue. The Indian government has stated that it has enough liquid oxygen for COVID patients, and that it is, in fact, expanding its supply. The government has placed the blame on mere logistical issues for the shortages – an explanation that many are reluctant to believe.

A court in New Delhi, which is run by the opposition Congress party, warned the federal government last week that it could face contempt charges over the lack of oxygen supplied to hospitals. A judge said: “The water has gone above our head. Enough is enough. You made an allocation of oxygen to Delhi, you fulfill it.”

The Indian federal Health Ministry reported on Monday that there are currently 368,147 new cases and 3,417 deaths from the virus.