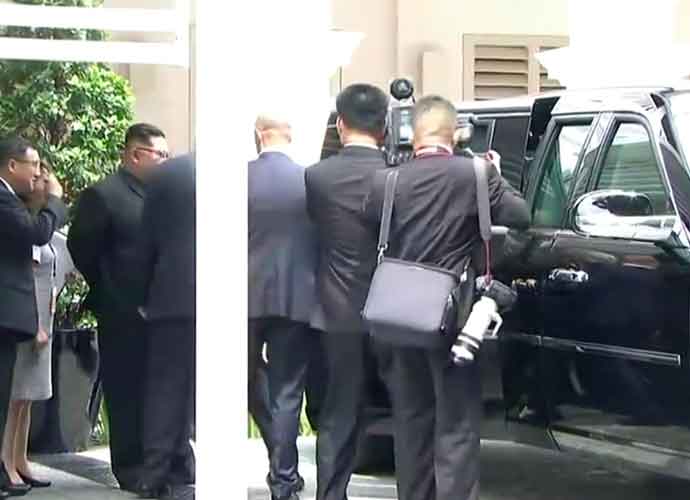 After meetings at their summit in Singapore, President Donald Trump and North Korean Leader Kim Jong-un made an unscheduled stop at Trump’s bulky black limousine known as “The Beast.”

Trump was making a classic alpha male move — showing Kim his ride. Body language expert Darren Stanton told The Sun Online, “I believe he showed him the vehicle out of ego as if to say, ‘your Maybach is great but look what I have! I think this because they have a short chat afterwards, Trump gives Kim Jong-un a little tap on the arm as if to say ‘good boy.’ ” Stanton added, “It’s a condescending gesture meant to say I’m in charge.”

The $1.6 million vehicle — also called Cadillac One — weights eight tons and is equipped with an armory of weapons including tear gas cannons and a shotgun. As well as making the vehicle bullet and bomb-proof, the doors also completely seal up the cabin to protect against chemical and biological attacks. The Cadillac Presidential State Car — its official name — even has bottles of the president’s blood type on board in case of a medical emergency. The vehicle is fitted with night vision cameras, GPS tracking and a satellite communication system to allow it to run in any conditions and make sure the President is always in contact.

Showing the car off to Kim could have also been an attempt to win favor with the North Korean dictator who is known to be a big fan of Western products. The country imported growing amounts of luxury goods, including expensive cars, liquor and musical instruments.

At the end of day, Trump told reporters, “A lot of progress. Really very positive. I think better than anybody could have expected. Top of the line. Really good.”