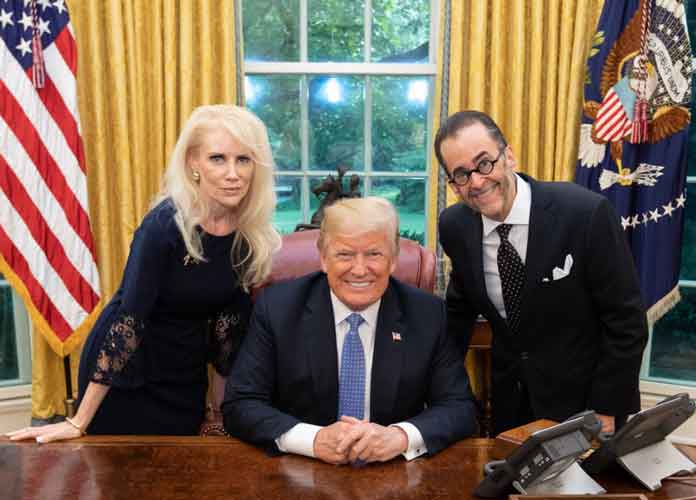 On Thursday, President Donald Trump appeared to meet with a right-wing conspiracy theorist at the White House.

A QAnon believer named Michael Lebron — who goes by the alias Lionel on social media — shared a photo on Thursday of himself posing with Trump in the Oval Office.

There are simply no words to explicate the profound and ineffable honor of meeting @realDonaldTrump in the tabernacle of liberty, the Oval Office. @LynnShawProd and I so appreciate @POTUS’ kindness and courtesy. #MAGA pic.twitter.com/9rfxca2Kbd

According to CNN, Lionel has appeared several times on Russia Today as a political and legal analyst. His website says he is an “avowed conspiracy analyst,” and he reportedly cites the September 11, 2001 terror attacks as the moment in his life that spurred him to believe in a series of conspiracy theories.

Lionel has added the hashtag #WWG1WGA to several of his photos on Twitter, something that reportedly stands for “Where We Go One, We Go All,” a phrase that many QAnon believers frequently use.

The QAnon deep-state conspiracy theory recently started making waves online, and claims that Trump is the man who will save the U.S. from a group of high-ranking Democratic politicians like Hillary Clinton and liberal celebrities like Tom Hanks and Steven Spielberg who secretly run child sex trafficking rings all over the country. Many Trump supporters have recently been seen at rallies holding signs or wearing T-shirts that read “We Are Q,” with “Q” referring to an anonymous high-ranking government official with top security clearance.

QAnon also claims special counsel Robert Mueller is not investigating Trump and his associates, but that instead the president and Mueller are working together to stop the proliferation of these pedophilia rings.